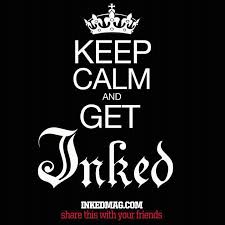 Humans have marked their bodies with tattoos for thousands of years. These permanent designs — sometimes plain, sometimes elaborate, always personal — have served as amulets, status symbols, declarations of love, signs of religious beliefs, adornments and even forms of punishment.

Tattoos talk. Rather than meaning something literal and universal, the art on our bodies is often personal and complicated.

To me, body art is a means of expression. It’s a journal of where I have been in my life and chronicles important events as well as beliefs that I hold dear to my heart. I got my first tattoo in 1996. It marked an event where I reconnected with a very important person in my life. This was an unexpected reunion of two people who were meant to be together. Life came full circle.

I wanted to honor this meeting of two different souls by using the yin yang symbol, a rose and a dolphin. 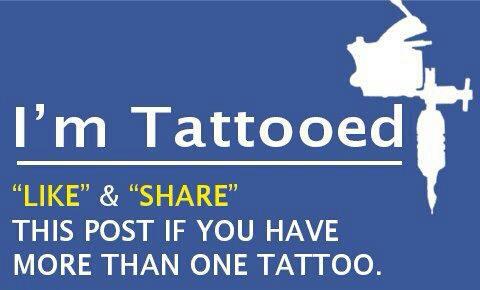 The most well-known of Taoist visual symbols is the Yin-Yang symbol. The image consists of a circle divided into two teardrop-shaped halves – one white and the other black. Within each half is contained a smaller circle of the opposite color.

What is the meaning of the Taiji symbol? In terms of Taoist cosmology, the circle represents Tao – the undifferentiated Unity out of which all of existence arises. The black and white halves within the circle represent Yin-qi and Yang-qi – the primordial feminine and masculine energies whose interplay gives birth to the manifest world. Basically it shows the duality present in every human being.

In my case, the use of the yin yang symbolizes the differences in both and how putting them together, a “whole” is created. Neither can exist without the other; each makes the other stronger. The rose symbolizes the romanticism of finding each other again and establishing a “couple”. The dolphin stands for my love of the ocean and all things “water” …. my horoscope sign is “cancer“.

As time went by, the image blurred and needed a touch up. I found and awesome artist in Ocala, Florida who did a wonderful job in completing this first tattoo. Two extra dolphins were added to represent the three grand kinds that I had at the time.

(May need to add another for a surprise baby boy who arrived last year).

In asian culture the koi swims upstream and up a waterfall (much like trout do to spawn) and once they reach the top of the waterfall they turn into a dragon (a symbol of the struggle of life and when you reach the end you get to heaven.)

For that reason many artists will only tattoo koi fish swimming up and NEVER down as that is a symbol of NOT persevering through life and not getting into heaven.

In Sanskrit, the meaning of Om is avati, or rakùati. Rakùati means
‘One who protects, sustains’. So that which sustains everything is Om. That means Om is the name of the Lord, who pervades your being,
who pervades everything in the world in the form of niyati, the form of the
order that sustains. 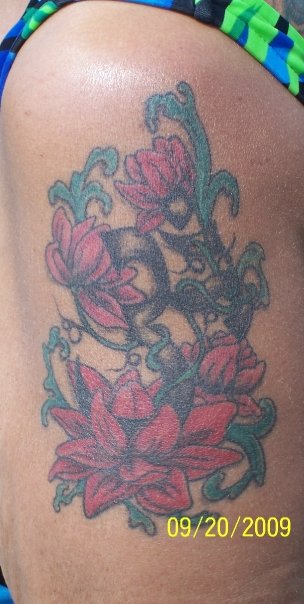 The lotus flower represents one symbol of fortune in Buddhism. It grows in muddy water, and it is this environment that gives forth the flower’s first and most literal meaning: rising and blooming above the murk to achieve enlightenment.

The second meaning, which is related to the first is purification. It resembles the purifying of the spirit which is born into murkiness. The third meaning refers to faithfulness. Those who are working to rise above the muddy waters will need to be faithful followers.

~~This tattoo was placed on my left arm~~

There is no other Hindu symbol more well known than Ganesha.

The Ganesha is a Hindu god straight out of Hindu mythology. The Ganesha is a very popular god with some of the most striking characteristics that many are sure to remember.

Incensed by the refusal of her husband to respect her privacy, to the extent of entering her private chambers even while she was having her bath, Parvati decided to settle matters once and for all. Before going for her bath the next time, she rubbed off the sandalwood paste on her body and out of it created the figure of a young boy. She infused life into the figure and told him he was her son and should guard the entrance while she bathed.

Soon after, Shiva (Lord of destruction and husband of Parvati,) came to see Parvati but the young boy blocked his way and would not let him in. Shiva, unaware that this lad was his son, became furious and in great anger fought with this boy whose head got severed from his body in the ensuing battle. Parvati, returning from her bath, saw her headless son and threatened in her rage to destroy the heavens and the earth, so great was her sorrow.

Shiva pacified her and instructed his followers (known as ganas) to bring the head of the first living being they encounter. The first creature they encountered was an elephant. They thus cut off its head and placed it on the body of Parvati’s son and breathed life into him. Thus overjoyed, Parvati embraced her son.

~~This tattoo was placed on my right arm~~ 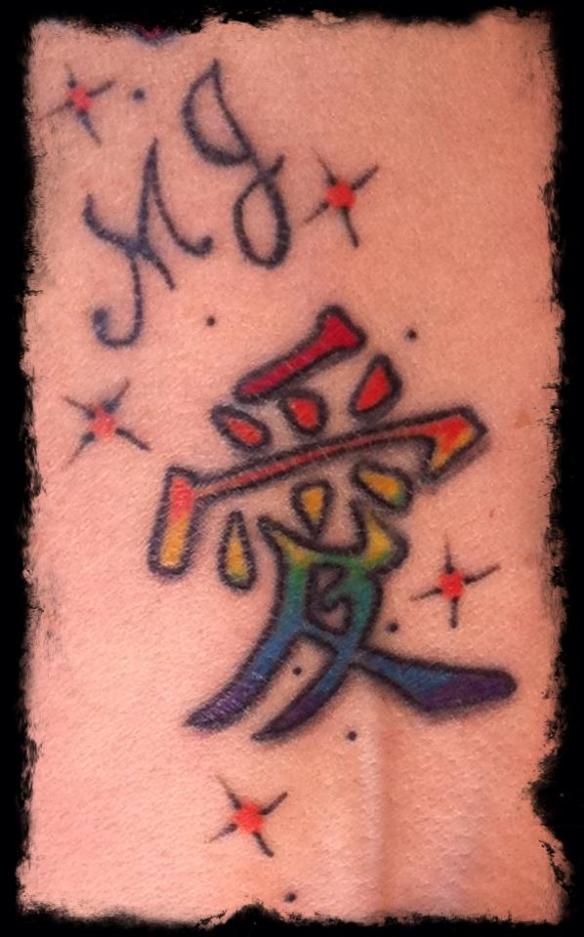 Kanji are the adopted logographic Chinese characters that are used in the modern Japanese writing system along with hiragana, katakana, Hindu-Arabic numerals, and the occasional use of the Latin alphabet. The Japanese term kanji for the Chinese characters literally means “Han characters”.

~~This is the Kanji symbol for love …. in the rainbow colors~~

“MJ” are the initials of my partner’s name.

The tattoo on the forearm is complex. It has the Kanji love symbol and also a hibiscus flower (my partner’s favorite) and the “equal” sigh … because we are all equal.

Quick summary of the 7 Chakras:

Root Chakra – Represents our foundation and feeling of being grounded.

Sacral Chakra – Our connection and ability to accept others and new experiences.

Solar Plexus Chakra – Our ability to be confident and in-control of our lives.

Heart Chakra – Our ability to love.

Throat Chakra – Our ability to communicate.

Third Eye Chakra – Our ability to focus on and see the big picture.

Crown Chakra – The highest Chakra represents our ability to be fully connected spiritually. 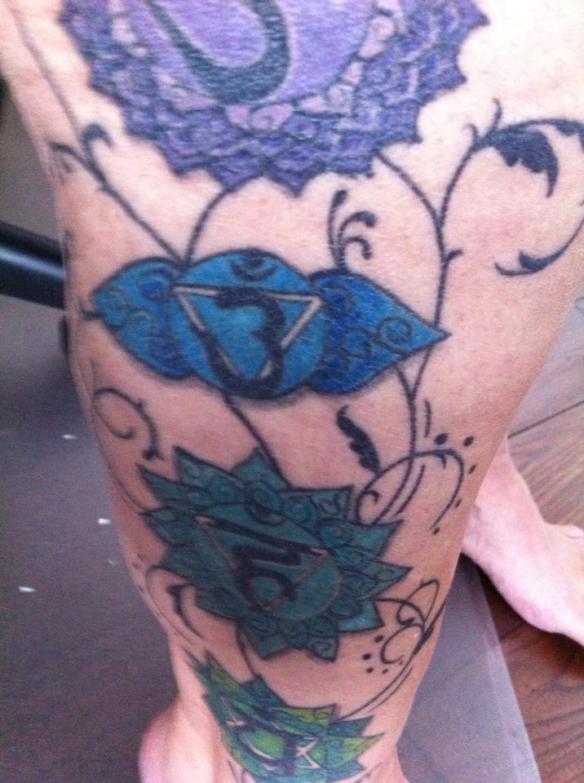 There are seven main energy centres (chakras) of the body. These chakras are like spirals of energy, each one relating to the others. Using the seven colours of the spectrum, Colour Therapy aims to balance and enhance our body’s energy centres/chakras and also to help stimulate our body’s own healing process.  Colour Therapy uses colour to re-balance the Chakras that have become depleted of energy.

Proud of my ink!!

….. and here you have it. These are all the tattoos that I have. They all have a meaning and they all represent a time in my life, my loved ones and my personal beliefs.

You keep getting to know me a little bit better each day!!

All of my tattoos have been works of art done by Ms. Stacy DePaola

You can find Stacy here:

We ALL are connected!!!