One more photograph from Prince George‘s special christening day has been released! The royal family celebrated Prince George’s christening at the Chapel Royal at St. James Palace in London on Oct. 23. The following day, four beautiful snapshots were released from the historic occasion.

The latest photo, taken yet again by celeb photographer Jason Bell, shares a sweet and very touching moment between the little boy and his royal parents, the Duke and Duchess of Cambridge. In the personal photograph, Kate Middleton holds Prince George, 3 months, as the two doting parents fawn over their precious baby boy. In the close up, Prince George smiles up at a beaming Middleton with a huge grin, as Prince William stares down with a subtle expression.

Just like the others, the photo was taken immediately following the Oct. 23 baptism in the Morning Room at Clarence House, Kensington Palace.

In previous shots, Kate Middleton and Prince William, 31, posed with their little bundle of joy as he sat on Middleton’s lap waving his arm for the camera. In another, Prince William held his son proudly while standing next to his father and the next monarch of England, Prince Charles. As the men stood, Queen Elizabeth II smiled wide as she sat in front of them for the beautiful and historic picture.

In a third portrait, Prince Harry, the Queen’s husband, Prince Phillip, Duke of Edinburgh, and Prince Charles’ wife, Camilla, Duchess of Cornwall, got in for a special moment. As all looked on at the camera, the Queen looked quite smitten with Prince George as she peered down to look at the baby boy.

Lastly, a final photograph brought the entire family together, which included eight royals and Middleton’s side of the family. The Duchess’ family, parents Carole and Michael Middleton, and brother James Middleton stood next to one another, as Pippa Middleton, 30, stood behind her older sister and next to Uncle Harry.

All in the family ….

For the special day, both Kate and Pippa donned seemingly similar dresses. The first-time mom stunned in a cream-colored dress with ruffle detailing by Sarah Burton for Alexander McQueen, which also was her wedding gown designer. The 30-year-old aunt, meanwhile, wore a high neckline pink dress with a cream-colored, wool trapeze coat.

Later that evening, Kate continued her busy day by attending the 100 Women in Hedge Funds Benefit Gala, the second formal event since giving birth in July. Wearing a navy blue Jenny Packham gown, the glowing new mom couldn’t help but gush about little George and the big event from earlier that day. 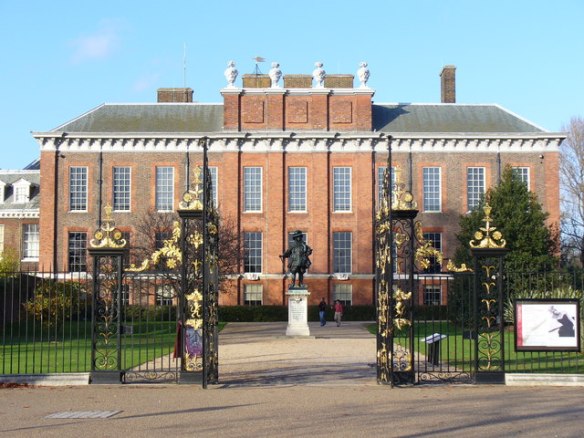 “He was such a good boy,” she said when asked about the christening. “Actually, we’re very lucky, he’s not always like that, but all the people there, lots of action going on, it’s slightly distracting.”