… and quite a lesson they have been!!

Elizabeth Schulte tells the story of the campaign, organized against all odds, to keep nine innocent Black teenagers from being executed in Alabama’s death chamber. 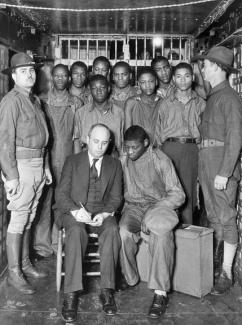 The Scottsboro Boys in prison, speaking with a lawyer

ALMOST 80 years after the trial that condemned nine innocent Black teenagers to death for allegedly raping two white women, the Alabama parole board has finally issued a pardon to the last three Scottsboro Boys.

The old saying that “the wheels of justice turn slowly” is a grotesque understatement in this case.

The Alabama justice system’s eight-decades-too-late decision only underscores the Herculean antiracist struggle to save the nine youths from a legal lynching in the 1930s Jim Crow South.

The Scottsboro Boys survived because of a fight waged across the country, with protests and other actions that brought the realities of Southern racism into the spotlight at the same time that they exposed the…