Nicole Colson reports on the aftermath of the chemical spill in West Virginia. 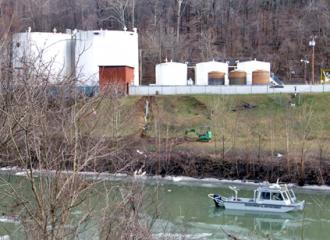 Freedom Industries’ terminal on the banks of the Elk River

WOULD YOU drink the water coming out of West Virginia’s Elk River?

In a sane world, no one would hesitate to answer “yes” to such a question. In the richest country in the world, access to clean water ought to be a sure bet–even in a more rural or traditionally impoverished area.

But as we know, starting two weeks ago, water from the Elk River–piped to residents of West Virginia’s capital of Charleston and a total of nine counties–was undrinkable for days after a chemical spill, and the long-term consequences of the disaster remain unknown.

On January 9, a tank at a terminal owned by Freedom Industries began leaking 4-methylcyclohexane methanol, or MCMH–a chemical used in the deceptively named “clean coal” process. The leak was only discovered…