My very dear friend …. Jueseppi ObamaCrat Baker … from http://theobamacrat.com/ …. just completed an incredible series to celebrate Black History Month, celebrated in February. This series consisted of a daily post related to events, historical moments, important and celebrated human beings and not well known characters and facts in American history and the roles that the African Americans played in it.

This is a well researched, prepared and presented series. Each daily post was very educational for me. The effort put into each one was very notable. The research for each extraordinary. The organization of information superb.

I’m aware that Jueseppi has already listed the links to all of his posts. I would like to do my part in the dissemination of the information that he presented and share it with you, dear readers, because of the educational quality of these posts. I don’t think that the selected topics are taught in school.

I’m sharing my friend’s links and his graphics in an attempt to honor his his effort in the research and presentation of this often forgotten part of our historical background and a testament to the importance of the characters who played a significant part in the formation of this country.

I have not asked for his permission. I’m doing this as a surprise for him and do hope that he realizes that I recognize and point out without a doubt that ALL the credit goes to him.

I was always left waiting for the next installment. And Jueseppi didn’t disappoint me. I’m somewhat sad to see the series come to a glorious end.

“Throughout the month Of February, TheObamaCrat™ will post a daily series called The Black History Moment Series. Each day for 28 days of this historic month you will be given the food of Black History to satisfy your hunger for knowledge. 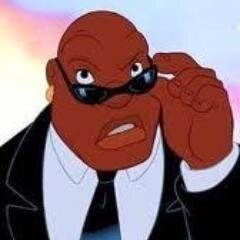 A compilation of speeches around the theme of Inspiring Words.

All credit goes to its respective creators.

We ALL are connected through HISTORY!!

We all know that a dog is a man’s best friend…and here’s proof!! A dog guards it’s Master as this soldier sleeps in an airport…AWESOME!

Her jaws clamped firmly around the scruff of her tiny cub’s neck, this plucky lioness is taking no chances as she tackles a risky river crossing.

As her nine-week-old youngster dangles beneath her, the mother skips gingerly between impromptu stepping stones.

These stunning images capture the heart-stopping moment the lioness braved choppy waters, clasping her little one’s nape, as she made her way to join the rest of the pride on the other side of the river.

Amazingly, the cub escaped with only a sodden coat as its mother safely negotiated the fast-flowing waters of the Ntiakitiak River in Kenya’s Masai Mara game reserve.

Greek photographer Kyriakos Kaziras managed to capture the moment during a trip in December.

Our government official, politicians, new media and the public are at wit’s end worrying about what to do with the world?

Americans, if you are so sure that you want to go to war,

now’s your chance, stop this invasion of our land be a group of bullies hell-bent on making a profit at your expense!

Will my friends, the United States of America is about to be attacked and half of it will be destroyed and no one in our government, our politicians, the news media or the public seems to care?

Love the history of it all!! TY for posting!

Really?? No, really?? Why exterminate??

Between Thorn Bushes and Claws

The Project Gutenberg EBook of The Extermination of the American Bison, by William T. Hornaday

This eBook is for the use of anyone anywhere at no cost and with almost no restrictions whatsoever. You may copy it, give it away or re-use it under the terms of the Project Gutenberg License included with this eBook or online at http://www.gutenberg.org

Title: The Extermination of the American Bison All around the world America has been the most devoted advocate for democracy and free elections. For those brave citizens in countries that have thrown out their dictators and such, seeking civil rights, we emphasize free and fair elections and help organize them. We provide monitoring of elections and send election observers to keep them free and honest.

Great. Wonderful. The people should have their vote on who their leaders and representatives in government should be.

When are we going to do this at home?

Our elections have become a sham. Yes, “we the people” do get out to stand in line and vote (not enough), and expect our vote to count towards who our next president and leaders in government will be. Then we watch the election results come in on TV. While they do show the popular vote tallies, the important part is the number of electoral votes…

Denice Frohman, a spoken word poet, wowed audiences at the ‘Women of the World Poetry Slam’ in the US earlier this year with her performance of ‘Dear Straight People.’

A video of the performance which has gone viral, shows Frohman highlighting the ways straight people and heteronormative culture attempt to regulate the lives and relationships of LGBT people.

I first became aware of Frohman’s work through her poem, “Dear Straight People.” I contacted her, and she was good enough to give me an interview. Mostly I’m going to stay out of the way and let you listen to her.

At Denice Frohman you can find lots of good information, including biographical. Briefly, she is

… an award-winning poet, lyricist, and educator, whose multicultural upbringing inspires her to explore the intersections of race, gender, sexuality, and the ‘in-betweeness’ that exists in us all. She is the 2013 Women of the World Poetry Slam Champion, a 2012 Leeway Transformation Award recipient, and 2013 Southern Fried Poetry Slam Champion.

I asked Denice to talk about writing “Dear Straight People.” (emphasis added throughout) ….

“I wrote this poem after getting harassed in front of my house … two nights in a row. It had been building up inside of me but these incidences really set me off in terms of what it means to be visible in a public space, what LGBT couples do … in public, and then more broadly, what homophobia and heterosexual privilege actually look like.

I was so upset, I stormed in the house and starting letting off steam. Most of what I said made the poem in one form or another. I was upset and tired of dealing with this, and I wanted to do something about it. This poem was me doing something about it. Performing the poem is really empowering for me because there have been many times where I have not said anything when I’ve gotten harassed for fear of my safety, etc. Being on stage and having others share it in solidarity has meant a lot to me. I recognize now that this poem is bigger than what happened to me that night. It’s what happens to people like us every day.

I want people to think critically about homophobia and at the end of the day how ridiculous it is. The tone of the poem addresses serious issues but in a ‘are you really serious?’ kind of way. That’s honestly what lived in my heart and still do. I also want straight folks to really think about their privilege, how it functions, how it does not make room for others, what language it speaks, and how important it is to be an ally.”