Now as a man is like this or like that,
according as he acts and according as he behaves, so will he be;
a man of good acts will become good, a man of bad acts, bad;
he becomes pure by pure deeds, bad by bad deeds;

Today is her birthday. Here’s a celebration of her life. Honoring a bit of all that she has accomplished. She has done so much in her professional life that it’s almost impossible to honor her adequately in a short post. She’s one of my favorite singers and I was able to see her show live when she performed at the San Juan Hotel in Puerto Rico.

Liza May Minnelli (born March 12, 1946) is an American actress, singer and dancer. She is the daughter of singer and actress Judy Garland and film director Vincente Minnelli.

Already established as a nightclub singer and musical theatre actress, she first attracted critical acclaim for her dramatic performances in the movies The Sterile Cuckoo (1969), and Tell Me That You Love Me, Junie Moon (1970); Minnelli then rose to international stardom for her appearance as Sally Bowles in the 1972 film version of the Broadway musical Cabaret, for which she won the Academy Award for Best Actress in a Leading Role. She later co-starred in Arthur (1981), starring with Dudley Moore (in the title role) and Sir John Gielgud.

While film projects such as Lucky Lady, A Matter of Time and New York, New York were less favorably received than her stage roles, Minnelli became an entertainer in television, beginning with Liza with a Z in 1972, and on stage in the Broadway productions of Flora the Red Menace, The Act and The Rink. Minnelli also toured internationally and did shows such as Liza Minnelli: At Carnegie Hall, Frank, Liza & Sammy: The Ultimate Event, and Liza Live from Radio City Music Hall.

She starred in Liza’s Back in 2002. She had guest appearances in the sitcom Arrested Development and had a small role in the movie The OH in Ohio, while continuing to tour internationally. In 2008/2009, she performed the Broadway show Liza’s at The Palace! which earned a Tony Award for Best Special Theatrical Event. 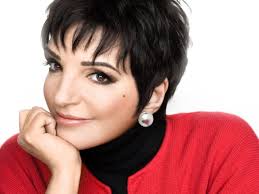 Minnelli has won a total of four Tony Awards, including a Special Tony Award. She has also won an Oscar, an Emmy Award, two Golden Globes and a Grammy Legend Award for her contributions and influence in the recording field, along with many other honors and awards. She is among the few entertainers who have won an Oscar, Emmy, Grammy, and Tony Award. In 2000, Minnelli was inducted into the American Theatre Hall of Fame. ~~Young Liza with her mother, Judy Garland, on the set of Summer Stock in 1950~~

Minnelli has, throughout her lifetime, served various charities and causes which she considers very important. She served on the board of directors of The Institutes for The Achievement of Human Potential (IAHP) for 20 years, a nonprofit educational organization that introduces parents to the field of child brain development. In a 2006 interview with Randy Rice at Broadwayworld.com Minnelli said that she was the person who told Elizabeth Taylor about HIV/AIDS while talking about their mutual friend, Rock Hudson. She has also dedicated much time to amfAR, The Foundation for AIDS Research, which was co-founded by Taylor.

In 2007, she stated in an interview with Palm Springs Life magazine, “AmfAR is important to me because I’ve lost so many friends that I knew [to AIDS]”. In 1994, she recorded the Kander & Ebb tune “The Day After That” and donated the proceeds to AIDS research. That same year she performed the song in front of thousands in Central Park at the 25th anniversary of the Stonewall riots.

We ALL are united through MUSIC!!

Could this be it?? Wondering!

A Chinese satellite probing the mysterious disappearance of Malaysia Airlines Flight 370 “observed a suspected crash area at sea,” a Chinese government agency said — a potentially pivotal lead into what thus far has been a frustrating, fruitless search.

China’s State Administration for Science, Technology and Industry for National Defense announced the discovery, including images of what it said were “three suspected floating objects.”

The images were captured around 11 a.m. on March 9 — which was the day after the plane went missing — but weren’t released until…

Thank you so much for writing this post. Dr. Luis Nieves Falcon …. RIP.
I’m sure you will find some causes wherever you go!!!

Like some of you might know from some previous posts and reblogs, we have a WordPress Wolf Pack.

Okay, maybe I should explain a little…. lol 😉

It all started with this award I created a while ago, The Semper Fidelis Award.

I created this award because I wanted to do something special for my friends on WordPress.

I always call my closest friends and family ‘My Wolf Pack’.

Semper Fidelis is Latin and means Always Loyal. Loyalty means the world to me. I am very loyal myself, but I’ve got major trust issues as well. And I think trust is very important if you are sharing so much of yourself with people you meet through the internet. So I am working on that!

Why the wolves? Because wolves have very strong ties with their pack. Like a family or a great group of friends. And I…

We are indeed in the wrong profession!!!

And this is all tax free…..I’m in the wrong business…..

‘Safe at the Houston megachurch was broken into meaning that cash, checks and credit card slips from masses on March 8 and 9 were stolen’.

‘Online donations and those left in collection boxes were not affected’.

‘Church has not released the official total saying that the money in the safe had not yet been counted but reports estimate it is around $600,000′.

‘Lakewood Church has their collections insured so they will get the money back’.

‘This includes cash, checks and envelopes containing written credit card information, and it is limited only to those funds contributed in the church services on Saturday, March 8 and Sunday, March 9, 2014.’
From : http://www.democraticunderground.com/1014752072

For Global Day Against Homophobia

On the 20th March  the world will protest homophobia and Uganda Gay On Move (UGOM), a community in the Diaspora, is scheduling a demonstration in Amsterdam, for the world global day of action against homophobia and laws that violate human dignity.

The recently enacted laws in Nigeria and Uganda are a violation of their respective Constitutions and the United Nations Charter on Human Rights, in respect of which Uganda and Nigeria are signatories, and as such, should be challenged and repealed forthwith.

The violations include discrimination against LGBTI people as well as are the harsh penalties which jail LGBTI persons for for homosexuality, as well as punitive measures for the so called promotion of homosexuality. Already people in  Igeria have been subjected to public flogging. The law seems to provide a tacit license to people to commit so called…

Is has been stated!! War looming??

A throwback to when this blog began …..

Where art inspires beauty and peace, there is serenity.

The idea for this blog started on Facebook with a Play it back and forth post-it game. The idea being to post a piece of art by an artist another player had given you. It went a little crazy and now we are here ready to share the talents of the artists we find along the way.

To play on the blog a slight rule change please comment on a post and the poster will give you an artist.

Mild erotica is fine but nothing over the top as this blog is an open one. Also always credit the artist and if possible give a link to their work.

For years art has been an escape into peace and harmony.

To share that is an awesome opportunity. If you want to help us spread a little beauty in cyberspace all you have to do is click the contact button to let us know and you will be given an artist to get your posts rolling.

Congratulations on getting 5 total likes on The Beautiful Blog.

If you thought the battle ended with AZ, think again.

Let’s roll up our sleeves, friends. Intolerance and bigotry must be fought through education, with vigilance, and from the higher ground.