Enrique “Ricky” Martín Morales (born December 24, 1971), is a Puerto Rican pop musician, actor and author. Martin began his career at age twelve with the all-boy pop group Menudo; after five years with the group, he released several Spanish-language solo albums throughout the 1990s. He also acted on stage and on TV in Mexico, becoming a modest star in the country. In 1994 he starred on the American TV soap opera General Hospital, playing a Puerto Rican singer.

The artist known as Wisin, one half of the powerhouse urban duo Wisin y Yandel, has signed a recording deal with Sony Music and will release a solo album in December. The announcement by Sony comes less than a week after the news that Yandel will release his own solo album on the label in November.

Jennifer Lynn Muñiz Lopez, born July 24, 1969) is an American actress, dancer, singer, fashion designer, perfumer, philanthropist, producer, recording artist and television personality. She became interested in pursuing a career in the entertainment industry following a minor role in the 1986 film My Little Girl, to the dismay of her Puerto Rican parents, who believed that it was an unrealistic career route for a Hispanic.

These three Latin musicians have joined forces in a new musical project.

LET EVERYONE WHO HAS A WIFE/GIRLFRIEND/ DAUGHTER/ FRIENDS AND COLLEAGUES KNOW, PLEASE!

Bottled water in your car is very dangerous!
Some personalities who have battle with breast cancer associate bottled water with their medical condition. It has been identified as a common cause
of the high levels of dioxin in breast cancer tissue.

Some oncologists may recommend that women should not drink bottled
water that has been left in a car. The heat reacts with the chemicals
in the plastic of the bottle which releases dioxin into the water.
Dioxin is a toxin increasingly found in breast cancer tissue.

Please
be careful and do not drink bottled water that has been left in a car.

Pass this on to all the women in your life.

This information is the kind
we need to know that just might save us! Use a stainless steel canteen
or a glass bottle instead of plastic!

This information is also being circulated at Walter Reed Army Medical
Center.

Some sources deny this claim. Some consider this urban legend.

Freezing water does not cause the release of chemicals from plastic bottles.

In general, it is best to follow the manufacturer’s recommendations when using any plastic products. When cooking with plastics, only use those plastic containers, wraps, bags and utensils for their intended purposes.

The U.S. Department of Agriculture Food Safety Inspection Service (FSIS) has some helpful guidelines for cooking with plastics in microwave ovens.

In my personal opinion and daily life, I take the route that seems safer to me. My job is to inform, not convince.

This post’s intention is to motivate the reader to research and find their own answers.

The Dangerous Affects of BPA in Bottled Water 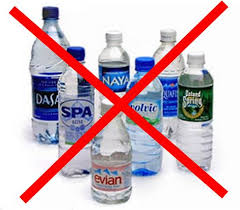 This is a very cool look at the way lightning forms, with branches like a tree that can strike from the cloud to the ground, and sometimes from the ground back to the clouds.

A little of Nature’s Drama and Majesty for a Sunday.

One day, I noticed something different in my referrer’s section of the stats page. It said StumbleUpon. Since I didn’t really know what it was, I decided to find out.
What I found out is that it can be a useful social media tool. It can also refer me to pages that I never would have found on my own. Pages that I didn’t even know that I needed. My favorite discovery was the page with the beach images along with beach sounds. There is a two minute timer. The point is to relax and meditate for two minutes. It’s much harder than it sounds. It is two minutes to think about nothing but relaxing.I can’t even tell you how much I miss going to the beach.This site helps alleviate some of that yearning for sand and sun.

It was the year 44 BC and Julius Caesar was at the top of his game, or so he thought. A respected seer had predicted his assassination on the Ides of March (March 15).  As he walked to the Theater of Pompey for a meeting of the Senate, he saw the seer in the crowd.  He said in a cocky way, “See, everything is fine with me!”  She warned, “The day is not yet over!”  At the theater, all 60 senators led by Cassius and Brutus were waiting to  stab Cesar  with the knives hidden in their togas. On that day Julius Cesar breathed his last breath being stabbed by men he counted as friends.

Statue  just outside the Forum which can be seen in the background.

Here is the statute to Julius Cesar standing just outside his Forum. And each year, flowers are laid at his feet, on the…

As you all know, I am a member of an amazing group of bloggers united in the Wolfpack. I have joined this group a few weeks ago and they all have great “proud follower of…” images. They are made bu Patty, the author of http://petitemagique.wordpress.com/

So a big huge Thank you to Patty. She made all the images for our pack

and our other members

~~Full Moon Names and Their Meanings~~

Full Moon names date back to Native Americans, of what is now the northern and eastern United States. The tribes kept track of the seasons by giving distinctive names to each recurring full Moon. Their names were applied to the entire month in which each occurred. There was some variation in the Moon names, but in general, the same ones were current throughout the Algonquin tribes from New England to Lake Superior.

European settlers followed that custom and created some of their own names. Since the lunar month is only 29 days long on the average, the full Moon dates shift from year to year. Here is the Farmers Almanac’s list of the full Moon names.

The next full Moon will be on Sunday, March 16, 2014, appearing “opposite” the Sun at 1:08 pm EDT. The Moon will appear full for about 3 days centered on this time, from late Friday night/early Saturday morning through early Tuesday morning.

Suitably celebratory celestial attire is encouraged in honor of the full Moon.

As the last full Moon of winter, this Moon is known as the Worm Moon, Crow Moon, Crust Moon, Sap Moon, Sugar Moon, or Lenten Moon.

According to the Farmer’s Almanac, the native tribes of what is now the northern and eastern U.S. named this the Worm Moon after the earthworm casts that appear as the ground thaws. The more northern tribes knew this as the Crow Moon, when the cawing of crows signaled the end of winter.

Other northern names are the Crust Moon, because the snow cover becomes crusted from thawing by day and freezing at night, or the Sap (or Sugar) Moon as this is the time for tapping maple trees. Europeans called this the Lenten Moon, as the next Moon, the first full Moon in Spring, occurs just before Easter.

In the Hebrew calendar the months change with the new Moon and the full Moons fall in the middle of the month. A solar year is about 11 days longer than twelve lunar months, so to keep holidays tied to their seasons, the Hebrew calendar occasionally repeats the month of Adar. This full Moon is the middle of the second Adar, called Adar Bet (Bet being the second letter of the Hebrew Alphabet), Adar Sheni (Second Adar) or Adar II. In leap years when there are two months of Adar, the 14th day of the first Adar is called Little Purim or Purim Katan, and the 14th day of the second Adar is the main Purim holiday. This year the main Purim holiday is from sunset on Saturday, March 15, to sunset on Sunday, March 16, 2014.

In the Islamic calendar the months start with the first sighting of the waxing crescent Moon, a few days after the New Moon. The full Moon on March 16th is in the middle of the Islamic month of Jumada al-awwal. Unlike the Hebrew calendar, the Islamic calendar has no leap days or leap months to stay in sync with the seasons, and Islamic holidays occur approximately 11 days earlier each solar year.