Today, Google celebrates what would have been the 115th birthday of Percy Julian, a chemist whose research led to chemical birth control and immune-suppressing medications.

Julian was born in Alabama on April 11, 1899, at a time when his city of Montgomery didn’t provide public education for black students post-middle school. Despite this, Julian persevered and ended up both attending and excelling at Indiana’s DePauw University. He later returned to the university to work on synthesizing plant products into medicine, where he found much success; some of his accomplishments include creating a synthetic cortisone to inexpensively treat arthritis and discovering a treatment for glaucoma.

Julian received many honors in (and after) his lifetime, including being the first black chemist to be elected to the National Academy of Sciences.

Percy Lavon Julian (April 11, 1899 – April 19, 1975) was a U.S. research chemist and a pioneer in the chemical synthesis of medicinal drugs from plants. He was the first to synthesize the natural product physostigmine, and a pioneer in the industrial large-scale chemical synthesis of the human hormones progesterone and testosterone from plant sterols such as stigmasterol and sitosterol. His work laid the foundation for the steroid drug industry’s production of cortisone, other corticosteroids, and birth control pills.

Percy Julian was born in Montgomery, Alabama as the first child of six born to James Sumner Julian and Elizabeth Lena Julian, née Adams. Both of his parents were graduates of what was to be Alabama State University. His father, James, whose own father had been a slave, was employed as a clerk in the Railway Service of the United States Post Office, while his mother, Elizabeth, worked as a schoolteacher. Percy Julian grew up in the time of racist Jim Crow culture and legal regime in the southern United States. Among his childhood memories was finding a lynched man hanged from a tree while walking in the woods near his home. At a time when access to an education beyond the eighth grade was extremely rare for African-Americans, Julian’s parents steered all of their children toward higher education.

Julian attended DePauw University in Greencastle, Indiana. The college accepted few African-American students. The segregated nature of the town forced social humiliations. Julian was not allowed to live in the college dormitories and first stayed in an off-campus boarding home, which refused to serve him meals. It took him days before Julian found an establishment where he could eat. He later found work firing the furnace, waiting tables, and doing other odd jobs in a fraternity house; in return, he was allowed to sleep in the attic and eat at the house. Julian graduated from DePauw in 1920 Phi Beta Kappa and valedictorian. By 1930 Julian’s father would move the entire family to Greencastle so that all his children could attend college at DePauw. The father was still working as a railroad postal clerk.

After graduating from DePauw, Julian wanted to obtain his doctorate in chemistry, but learned it would be difficult for an African-American. Instead he obtained a position as a chemistry instructor at Fisk University.

In 1923 he received an Austin Fellowship in Chemistry, which allowed him to attend Harvard University to obtain his M.S. However, worried that white American students would resent being taught by an African-American, Harvard withdrew Julian’s teaching assistantship, making it impossible for him to complete his Ph.D. at Harvard.

In 1929, while an instructor at Howard University, Julian received a Rockefeller Foundation fellowship to continue his graduate work at the University of Vienna, where he earned his Ph.D. in 1931. He studied under Ernst Späth and was considered an impressive student. In Europe, he found freedom from the racial prejudices that had nearly stifled him in the States. He freely participated in intellectual social gatherings, went to the opera and found greater acceptance among his peers. Julian was one of the first African-Americans to receive a Ph.D. in chemistry, after St. Elmo Brady and Edward M. A. Chandler.

After returning from Vienna, Julian taught for one year at Howard University, where he met his future wife, Anna Roselle Johnson (Ph.D. in Sociology, 1937, University of Pennsylvania). They married on December 24, 1935 and had two children: Percy Lavon Julian, Jr. (August 31, 1940 – February 24, 2008), who became a prestigious civil rights lawyer in Madison, Wisconsin; and Faith Roselle Julian (1944– ), who still resides in their Oak Park home and often makes inspirational speeches about her father and his contributions to science.

At Howard, Julian became involved in university politics, setting off an embarrassing chain of events. At the university president’s request, he goaded a white chemist named Jacob Shohan into resigning. Shohan retaliated by releasing to the local African-American newspaper the letters Julian had written to him from Vienna. The letters contained accounts of Julian’s sex life and criticism of individual Howard faculty members. Then Julian’s laboratory assistant, Robert Thompson, charged he had discovered his wife together with Julian in a sexual tryst. When Thompson was fired for filing a lawsuit against the University, he too gave the paper racy letters which Julian had written to him from Vienna. Through the summer of 1932, the Baltimore Afro-American published all of Julian’s letters.

Eventually, the scandal and accompanying pressure forced Julian to resign. He lost his position and everything he had worked for.

At the lowest point in Julian’s career, his former mentor, William Blanchard, threw him a much-needed lifeline. Blanchard offered Julian a position to teach organic chemistry at DePauw University in 1932. Julian then helped Josef Pikl, a fellow student at the University of Vienna, to come to the United States to work with him at DePauw.

In 1935 Julian and Pikl completed the total synthesis of physostigmine and confirmed the structural formula assigned to it. Robert Robinson of Oxford University in the U.K. had been the first to publish a synthesis of physostigmine, but Julian noticed that the melting point of Robinson’s end product was wrong, indicating that he had not created it. When Julian completed his synthesis, the melting point matched the correct one for natural physostigmine from the calabar bean. 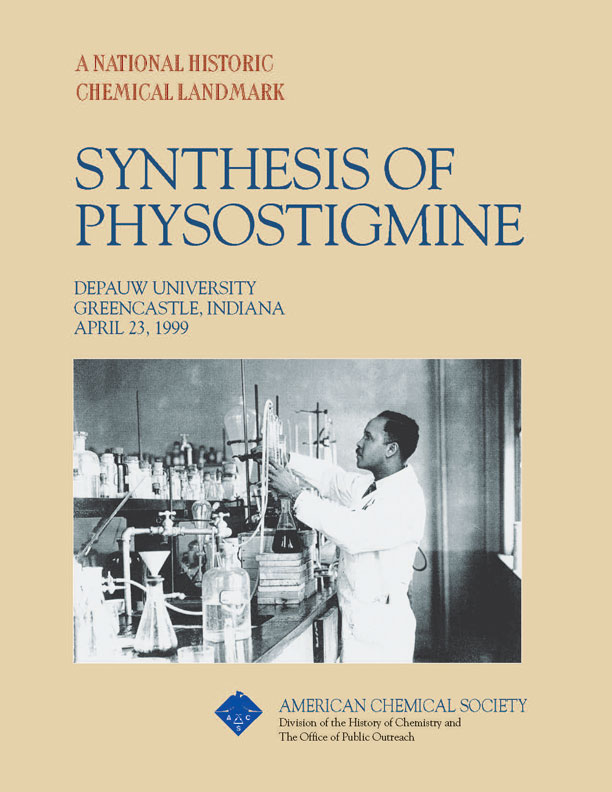 Julian also extracted stigmasterol, which took its name from Physostigma venenosum, the west African calabar bean that he hoped could serve as raw material for synthesis of human steroidal hormones. At about this time, in 1934, Butenandt and Fernholz, in Germany, had shown that stigmasterol, isolated from soybean oil, could be converted to progesterone by synthetic organic chemistry.

Ruben Santiago-Hudson portrayed Percy Julian in the Public Broadcasting Service Nova documentary about his life, called Forgotten Genius. It was presented on the PBS network on February 6, 2007, with initial sponsorship by the Camille and Henry Dreyfus Foundation and further funding by the National Endowment for the Humanities. Approximately sixty of Julian’s family members, friends, and work associates were interviewed for the docudrama.

Production on the biopic began at DePauw University‘s Greencastle campus in May 2002 and included video of Julian’s bust on display in the atrium of the university’s Percy Lavon Julian Science and Mathematics Center. Completion and broadcasting of the documentary program was delayed in order for Nova to commission and publish a matching book on Julian’s life.

~~According to University of Illinois historian James Anderson in the film~~ 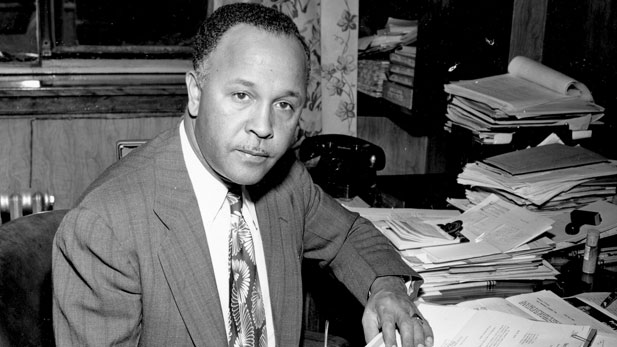 ~~Black History in Oak Park: Who was Percy Julian?~~

Percy Lavon Julian (April 11, 1899 – April 19, 1975) was an American research chemist and a pioneer in the chemical synthesis of medicinal drugs from plants. He was the first to synthesize the natural product physostigmine; and was a pioneer in the industrial large-scale chemical synthesis of the human hormones, steroids, progesterone, and testosterone, from plant sterols such as stigmasterol and sitosterol. His work would lay the foundation for the steroid drug industry’s production of cortisone, other corticosteroids, and birth control pills.

Around 1950 Julian moved his family from Chicago to the village of Oak Park, Illinois, where the Julians were the first African-American family. Although some residents welcomed them into the community, there was also opposition by some. Their home was fire-bombed on Thanksgiving Day, 1950, before they moved in. After the Julians had moved to Oak Park, the house was attacked with dynamite on June 12, 1951. The attacks galvanized the community and a community group was formed to support the Julians.

~~FOR YOUR CONTRIBUTIONS TO MANKIND, THANK YOU PERCY JULIAN~~