Dorothy Mary Hodgkin, OM, FRS (12 May 1910 – 29 July 1994), née Crowfoot, was a British biochemist, credited with the development of protein crystallography. She was awarded the Nobel Prize in Chemistry in 1964.

She advanced the technique of X-ray crystallography, a method used to determine the three-dimensional structures of biomolecules. Among her most influential discoveries are the confirmation of the structure of penicillin that Ernst Boris Chain and Edward Abraham had previously surmised, and then the structure of vitamin B12, for which she became the third woman to win the Nobel Prize in Chemistry.

In 1969, after 35 years of work and five years after winning the Nobel Prize, Hodgkin was able to decipher the structure of insulin. X-ray crystallography became a widely used tool and was critical in later determining the structures of many biological molecules where knowledge of structure is critical to an understanding of function. She is regarded as one of the pioneer scientists in the field of X-ray crystallography studies of biomolecules.

Dorothy Mary Crowfoot was born on 12 May 1910 in Cairo, Egypt, to John Winter Crowfoot (1873–1959), an archaeologist and classical scholar, and Grace Mary Crowfoot née Hood (1877–1957), an archaeologist and expert on Ancient Egyptian textiles. She lived in the English expatriate community in Egypt, returning to England only a few months each year. During one of those stays, when Hodgkin was four, World War I began. Her mother lost four brothers in the war. Separated from her parents, who would return to Egypt, she was left under the care of relatives and friends until after the end of the war when her mother came to England for one year, a period that she later described as the happiest in her life.

In 1921, she entered the Sir John Leman Grammar School in Beccles. Only once, when she was thirteen, did she make an extended visit to her parents, who by then had moved to Khartoum, although both parents continued to visit England each summer.

Google celebrates the life and rich legacy of late Dorothy Hodgkin on her 104th birth anniversary with a Google Doodle. This doodle is available on Google homepage for countries such as Japan, Taiwan, India, Phillipines, United States and United Kingdom.

The doodle dedicated to Dorothy is based on the protein X-ray crystallography developments and contributions made by Dorothy Hodgkin. The Doodle  includes the Molecular model of Penicillin which Dorothy had completed in 1945.

She was the third woman to receive Nobel Prize in Chemistry. 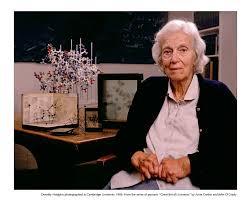 Among her most influential discoveries are the confirmation of the structure of penicillin that Ernst Boris Chain and Edward Abraham had previously surmised, and then the structure of vitamin B12, for which she was awarded the Nobel Prize in Chemistry.

She was also the first women to receive the Copley Medal.

Model of the structure of penicillin, by Dorothy Hodgkin, Oxford, c. 1945 Hodgkin is particularly noted for discovering three-dimensional biomolecular structures. In 1945, working with C. H. (Harry) Carlisle, she published the first such structure of a steroid, cholesteryl iodide (having worked with cholesteryls since the days of her doctoral studies). In 1945, she and her colleagues solved the structure of penicillin, demonstrating (contrary to scientific opinion at the time) that it contains a β-lactam ring. However, the work was not published until 1949. In 1954 she and colleagues began to publish their analysis of vitamin B12.

Insulin was one of her most extraordinary research projects. It began in 1934 when she was offered a small sample of crystalline insulin by Robert Robinson. The hormone captured her imagination because of the intricate and wide-ranging effect it has in the body.

However, at this stage X-ray crystallography had not been developed far enough to cope with the complexity of the insulin molecule. She and others spent many years improving the technique. Larger and more complex molecules were being tackled until in 1969 – 35 years later – the structure of insulin was finally resolved.

But her quest was not finished then. She cooperated with other laboratories active in insulin research, gave advice, and travelled the world giving talks about insulin and its importance for diabetes.

~~HONOR WHERE HONOR IS DUE~~

Did you know her before?

Thumbs up for her Google Doodle!

More information about her on https://royalsociety.org/grants/schem.