Awesome friends having a party … all the people that matter.

Lately things in my personal circle have been kinda tense. There’s some force that has been trying to create discord and ill feelings among a group of friends that were real. The connections started to fracture because of that old adage: “Divide and conquer”.

We have been compartmentalized and communication started to dwindle. We began to doubt sincerity, reality, truthfulness and bonds.

The only way to defeat “divide and conquer” is to start talking again and compare stories and experiences. This is the way for truth to come out. So many stories, so many versions, so many experiences. All pieces of a puzzle that is starting to come together.

That’s what we’ve started to do. We are mending our connections. They were there to start with and all they need is tending and care. We have started that process and are well on the way to recover what this “so-called” force attempted to do.

It was all smoke and mirrors.

Getting together! Out of the blue … the best way!!

GOOD MORNING, hangover-check, no voice-check, who cares-check, phenomenal fun the night before-check, all worth it-check. Have an awesome Monday ya’ll
…. and it all took place when saying …. “Can we come over?” ….. shows you what good and real friends do for and with each other!

No need to worry …. we got it together.
We are on the right path!!

“Hakuna matata” is a Swahili phrase that can be translated as “no worries” (a literal translation might be “there isn’t a problem/trouble”).
Its meaning is similar to the English phrase “no problem” and is akin to “don’t worry, be happy”. The phrase is uncommon among native speakers of Swahili in Tanzania, who prefer the phrase “hamna shida” in the north and “hamna tabu” in the south. The phrase has been popularized by its use in The Lion King and Timon and Pumbaa, so that it is heard often at resorts, hotels and other places appealing to the tourist trade.
~~HAKUNA MATATA~~

Lion King’s ‘Hakuna Matata’, with the official lyrics on screen. 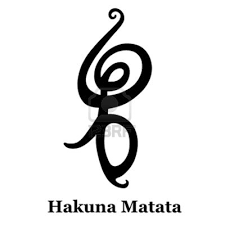