A participant of the riots standing up to the Police

The history of the gay rights movement can be traced to the Stonewall Inn in New York’s Greenwich Village, which is considered by many to be the launch of the modern gay, lesbian, bisexual and transgender rights movement.

June is celebrated all around the world as LGBT Pride Month everywhere.

Here is the reason why.

In the 1960s, LGBT people in USA faced a lot of discrimination in society. They were fired from jobs, kept on watch by police, harassed and arrested, publicly humiliated and sometimes some were sent to mental hospitals. Men wearing women’s clothes were also arrested regularly. Bars where gay men would visit would also be regularly raided and people would be arrested. LGBT people were used to living a life of fear and oppression.

But on 28th JUNE, 1969, Saturday, something different happened.

The police arrived in the STONEWALL INN, a gay bar in New York City to raid the place. As they started lining up the people, some started fighting back. Slowly, the little fights turned into a mob against the police and the oppressed LGBT people in the locality started fighting back. What started as a little scuffle, turned into a series of spontaneous riots and demonstrations around the city over the next few weeks. For the first time, LGBT people were openly out in the streets in such large numbers demanding acceptance and liberation. For the first time, such huge number of people took to streets to protest against oppressions on LGBT people. The riots show huge participation and role of cross dressers, transgenders and homeless feminine men too.

The riots gave birth to a new LGBT movement in USA. Soon, many openly gay organizations had been formed to fight for the rights of LGBT people.

On June 28th, 1970, exactly a year after the riots started the first LGBT Pride March was held in New York City.

45 years after the Stonewall Uprisings, we still continue to fight for the right of all people to live with dignity. June is celebrated as International LGBT Pride Month to commemorate the Stonewall Riots. The entire month of June sees hundreds of events and prides all over the country. Some events are also organzised in the first week of July.

Let us remember the day few people decided that they had enough. That they would not be pushed back.
They day we decided to fight back.

“Do You Think Homosexuals Are Revolting? You Bet Your Sweet Ass We Are!”

(This appeared on a flyer after the Uprising) 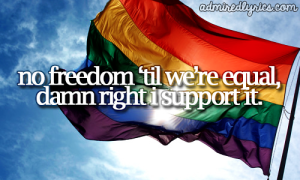