According to the chemtrail conspiracy theory, long-lasting trails left in the sky by high-flying aircraft are chemical or biological agents deliberately sprayed for sinister purposes undisclosed to the general public.

Believers in the theory argue that normal contrails dissipate relatively quickly, and contrails that do not dissipate must contain additional substances, but their arguments have been dismissed by the scientific community: such trails are simply normal water-based contrails (condensation trails) which are routinely left by high-flying aircraft under certain atmospheric conditions.

Although proponents have attempted to prove that the claimed chemical spraying does take place, their analyses have been flawed or based on misconception. 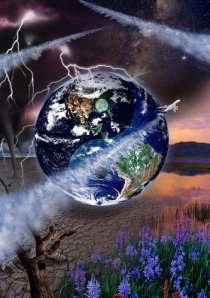 Because of the widespread popularity of the conspiracy theory, official agencies have received many inquiries from people demanding an explanation. Scientists and government officials around the world have repeatedly needed to confirm that supposed chemtrails are in fact normal contrails.

The term chemtrail is a portmanteau of the words “chemical” and “trail”, just as contrail is a contraction of “condensation trail”. Believers in the conspiracy theory speculate that the purpose of the claimed chemical release may be for solar radiation management, psychological manipulation, human population control, weather modification, or biological or chemical warfare, and that the trails are causing respiratory illnesses and other health problems.

Contrails are formed at high altitudes (5–10 miles or 8–16 kilometres) and if any chemicals were released at such altitude they would disperse harmlessly and fall many hundreds of miles away, or degrade before touching the ground. 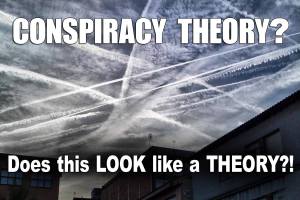 In 1996, a chemtrail conspiracy theory began to circulate when the United States Air Force (USAF) was accused of “spraying the U.S. population with mysterious substances” from aircraft “generating unusual contrail patterns.” The USAF says these accusations were a hoax fueled in part by citations to a strategy paper drafted within their Air University entitled Weather as a Force Multiplier: Owning the Weather in 2025.

The paper was presented in response to a military directive to outline a future strategic weather modification system for the purpose of maintaining the United States’ military dominance in the year 2025, and identified as “fictional representations of future situations/scenarios.” The USAF further clarified that the paper “does not reflect current military policy, practice, or capability,” and that it is “not conducting any weather modification experiments or programs and has no plans to do so in the future.”

Additionally, the USAF states that the “‘Chemtrail’ hoax has been investigated and refuted by many established and accredited universities, scientific organizations, and major media publications.” The conspiracy theory is seldom covered by the mainstream media, and when it is, it is usually cast as an example of anti-government paranoia.

An article in the Skeptical Inquirer said that the conspiracy theory was first started in the 1990s by “investigative journalists” like William Thomas, and then promoted in the late-night radio shows of Art Bell. The proponents claim that after 1995 contrails had a different chemical composition and lasted a lot longer on the sky; they never acknowledge the photographs of long-lasting contrails dating as far back as World War II.

In the United Kingdom, when the Secretary of State for Environment, Food and Rural Affairs was asked “what research her Department has undertaken into the polluting effects of chemtrails for aircraft,” the response was that “the Department is not researching into chemtrails from aircraft as they are not scientifically recognised phenomena,” and that work was being conducted to understand “how contrails are formed and what effects they have on the atmosphere.”

In a response to a petition by concerned Canadian citizens regarding “chemicals used in aerial sprayings are adversely affecting the health of Canadians,” the Government House Leader responded by stating, “There is no substantiated evidence, scientific or otherwise, to support the allegation that there is high altitude spraying conducted in Canadian airspace. The term ‘chemtrails’ is a popularised expression, and there is no scientific evidence to support their existence.” The house leader goes on to say that “it is our belief that the petitioners are seeing regular airplane condensation trails, or contrails.” 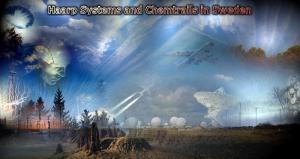 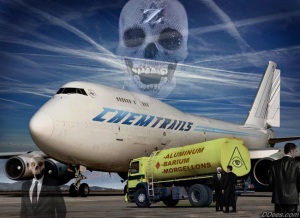 “What in the World are They Spraying?” – Official Trailer
http://www.realityzone.com/angels.html

The Reality Zone is producing a documentary that explores the murky world of atmospheric geo-engineering, commonly called chemtrails. The title of the program is: What in the World Are They Spraying! and we can tell you with confidence that it will be one of the most important programs you will ever see.

There are plenty of dramatic video clips of chemtrails on the Internet, and your innate intelligence tells you that what you see in the sky with your own eyes is not caused by mere vapor trails from jet aircraft, but no one yet has probed the questions: WHO is doing this and WHY. All of that is about to change.

We are working with two young journalistic film makers, Michael Murphy and Paul Wittenberger who already are far advanced in the development of this incredible story. 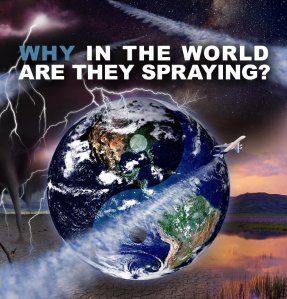 We ALL are connected through the ENVIRONMENT!!

2 thoughts on “Heads up: Chemtrail conspiracy theory …. what is the truth?”