El bolero de Raquel (English: Raquel’s Shoeshiner) is a 1957 Mexican comedy film directed by Miguel M. Delgado and starring Cantinflas, Manola Saavedra, Flor Silvestre, and child actor Paquito Fernández who was nominated for a 1958 Silver Ariel for Best Performance by a Child Actor for the role of Chavita.

This is Cantinflas’ first Mexican color film (it was filmed in Eastmancolor, also considered as Mexico’s Technicolor).

Cantinflas is a down on his luck but affable shoe shiner that learns that his compadre has died in an accident. His friend’s widow, Leonor (Flor Silvestre) is unable to raise her child, Chavita, so she leaves the kid with Cantinflas so she can go to Guadalajara, Jalisco in order to seek help from her parents. In the first days, Cantinflas goes to work in Chapultepec and Chavita catches a ball that some other children are playing with, and almost ends up in a fight with the owners of the ball. Cantinflas calms down the child by promising he will bring him a new ball.

In order to find a better job, Cantinflas goes to school, where he tries to learn but, instead, fails in love with Raquel Saavedra, an attractive teacher who works there. While in school, he tries finding more jobs, with comic results: first, as a shoe shiner in a night club, where he gets into various incidents on his first night, including an unexpected entrance in the dancers’ dressing room and an accidental entrance to Ravel’s Boléro dance act performed by Elaine Bruce (from which the pun in the Spanish title is drawn, as he confuses Ravel with the name of the teacher with whom he is infatuated, thus thinking that the dance is for him); the scene is reminiscent of his Apache dance in the 1944 film, Gran Hotel. After sabotaging the act, Cantinflas is removed from the night club. 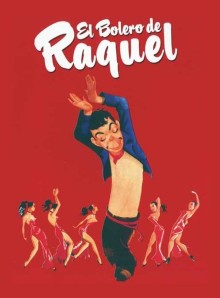 Cantinflas tries to get new jobs in Acapulco, where he tries everything to get some money, when accidentally Chavita leaves Cantinflas to climb La Quebrada. Cantinflas tries to rescue him, but he is stuck himself at the top of La Quebrada (as Chavita escapes easily to the other side) and he is obliged to make a spectacular dive. His action leads him to get a job as a life saver but his incompetence when attempting to save a large woman from drowning (almost drowning himself in the process) causes him to be fired the same day.

Finally, Cantinflas gets enough money to raise his godson and buys him a new big ball, but Leonor returns from Guadalajara, with a husband, a better life and a brand new ball. Chavita leaves Cantinflas and he sadly sees the scene. Angrily he kicks the ball, the ball goes to Raquel’s feet and finally they get together.

El bolero de Raquel satirizes the lifestyles of the rich with their bodyguards, managers, etc. through scenes set in posh nightclubs. Though a relative box-office disappointment for a Cantinflas film, it still ranked among the most profitable Mexican films of the year.