Today is the 162nd day since 273 Nigerian school girls were kidnapped. I haven’t forgotten about them. I wish that they were back home. I can’t bare to think what they have gone through and how they will be when they return … if they return.

“The International Committee of the Red Cross has become involved in a secret prisoner swap deal to secure the release of the Nigerian schoolgirls kidnapped by Boko Haram, the Telegraph has learned.
Officials from the Geneva-based organization have sat in on talks between the Nigerian government and a senior Boko Haram leader currently held in one of the country’s maximum security prisons.
The Red Cross officials have also visited a number of other jails, identifying a list of 16 senior commanders that Boko Haram wants freed in exchange for its hostages.
The group is thought to be holding more than 220 schoolgirls captive, having kidnapped them from the north-east town of Chibok in mid-April.
The ICRC’s role in the talks represents the first official confirmation that the Nigerian government is actively engaged in talks with Boko Haram over the release of the girls. Publicly, Nigeria’s president, Goodluck Jonathan, has maintained that the government would never agree to any kind of negotiations.”

~~Bring Back Our Girls~~

On April 14, over 230 school girls were kidnapped from their dorm rooms by terrorists in Nigeria. The world has done nothing to rescue them.

This video was made by Louis Adeyemi, a young Nigerian Director (@thelouisking). The voice you hear is of a father of one of our kidnapped girl’s. The images are not of the actual girls that were kidnapped. They are are Nigerian girls and used symbolically.

Join us on twitter/rescueourgirls and facebook.com/bringbackourgirls and let us march on social media to raise awareness. Write and call your leaders. Now. 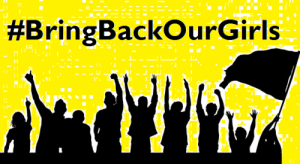 8 thoughts on “What happened to #BringBackOurGirls …. update!!”