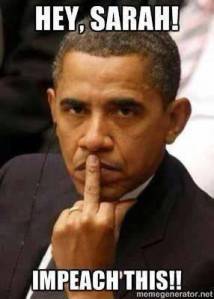 It should be a criminal offense for what Roger Ailes has done to the already fractured and mostly minuscule minds of people who actually digest and ignorantly pass the repugnant conservative misinformation found on Faux News.

Jimmy-Bob Jackshit really believes the world, as his corn-cracking ass has known it-is coming to an end because of President Obama. Everything that Great-Grandpappy Goober Gumpfuck fought, stole and pillaged for has “suddenly” been compromised by this president.

His trailer is being repossessed because he’s too fucking stupid to get past his name on a job application-Blame Obama!

Hurricane Katrina(2005) and Superstorm Sandy were blown into existence by that “thar Kenyan”/Socialist” to push the “lies” of climate change. Ocean water will eventually move inland, flooding his cave of unbridled ignorance with trash from his former home-Blame Obama!