The NOH8 Campaign is a charitable organization whose mission is to promote marriage, gender and human equality through education, advocacy, social media, and visual protest.

On November 4, 2008 Proposition 8 passed in California, amending the state Constitution to ban same-sex marriage. The defeat provoked a groundswell of initiative within the GLBT community at a grassroots level, with many new political and protest organizations being formed in response.

The NOH8 Campaign is a photographic silent protest created by celebrity photographer Adam Bouska (http://www.bouska.net) and partner Jeff Parshley in direct response to the passage of Proposition 8. Photos feature subjects with duct tape over their mouths, symbolizing their voices being silenced by Prop 8 and similar legislation around the world, with “NOH8” painted on one cheek in protest.

Five years since its inception, the NOH8 Campaign has grown to nearly 33,000 faces and continues to grow at an exponential rate. The campaign began with portraits of everyday Californians from all walks of life and soon rose to include politicians, military personnel, newlyweds, law enforcement, artists, celebrities, and many more.

While inspired by the passage of Prop 8, the scope of the NOH8 Campaign has grown to stand against discrimination and bullying of all kinds. The message of ‘No Hate’ can be interpreted and applied broadly, and speaks to each person in their own way.

The NOH8 Campaign has received overwhelming support from around the world, and has appeared in various local and national news programs and publications. The images are widely used on various social networking sites such asFacebook and Twitter to spread the message of equality.

“Hi my name is Ryan and I made this video us­ing pic­tures from http://www.noh8campaign.com/ as a trib­ute to Gay Rights and al­so to the peo­ple who Sup­port Gay Rights” 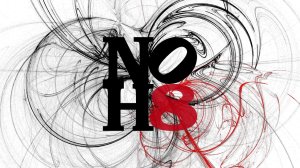