I didn’t watch the Oscars, I have them recorded and may watch it later … or not.

As the event unfolded, some tweets were coming in and one caught my eye about this young man who has said something along the lines of “suicide and being weird”. This prompted me to start searching and I found that there are many out there trying to “explain” and “dissect” this young man’s acceptance speech.

As I’ve listened to it, please, let it be. Stop trying to interpret his words beyond a simple meaning of who “being different” (whatever that may be) can affect a young person’s life to such a degree that they may consider taking their own lives.

Take it at face value: this is a message of hope.

My interpretation without exhausting it to bits …

Don’t give up. Even though things look bad at the time, there’s always the possibility of them getting better. There’s a possibility of such success (whatever that may be) that you could be in a position that you have never imagined …. and your troubles, feelings and depression didn’t defeat you. 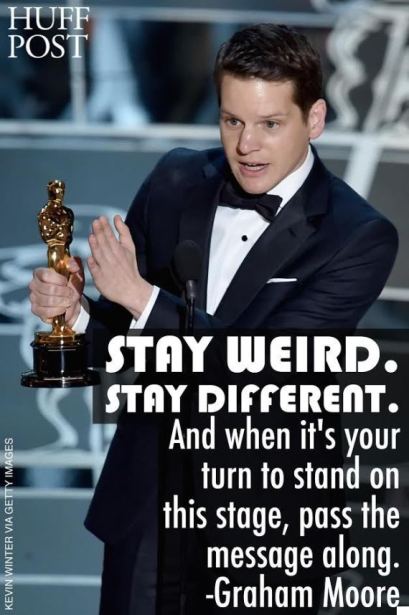 When first-time Academy Award nominee and winner Graham Moore opened up about feeling “weird,” “different, and like he “did not belong,” many assumed the screenwriter and author was alluding to being a then-closeted homosexual. Perhaps it was his deep connection with The Imitation Game’s protagonist Alan Turing, a gay man who ultimately took his own life because he was a gay man living in an extremely homophobic Britain. Moore clarified his speech at the Oscars’ Governors Ball.

“I’m not gay,” Moore told BuzzFeed News, “but I’ve never talked publicly about depression before or any of that, and that was so much of what the movie was about — it was one of the things that drew me to Alan Turing so much.” He continued to expand on the universal feeling of being “other” at times in our lives before touching on another (mostly) universal tendency: practicing your Oscars speech with a shampoo bottle.

“It’s the kind of thing that I’ve imagined since I was a teenager,” Moore said, explaining how surreal it was to actually be reciting a story he’d been “imagining in the shower and in front of mirrors.” Luckily for him, all those years of rehearsing paid off in spades.

Moore scored the Oscar for his work on The Imitation Game, the movie that, on the surface, deals with Alan Turing’s quest to crack the Nazi enigma code during World War II. The Imitation Game, however, was more than just a war film; it explored Alan Turing’s personal trials as a homosexual living in Britain at a time when homosexuality was considered a crime. Turing’s story was, for whatever reason, widely unknown to popular culture until Moore’s film hit Hollywood. (Turing was posthumously pardoned by the British government for his “crime” in 2013.) So, when Moore won this evening, he used his time in the spotlight to inspire weirdness.

“In this brief time here, what I want to use it to do is to say this,” Moore said after receiving his statue from Oprah. “When I was 16 years old, I tried to kill myself because I felt weird, and I felt different, and I felt like I did not belong. And, now I’m standing here. So, I would like this moment to be for that kid out there who feels like she’s weird, or she’s different, or she feels like she doesn’t fit in anywhere. Yes, you do. I promise you do. Stay weird. Stay different. And, then when it’s your turn, and you are standing on this stage, please pass the same message to the next person who comes along.”

Be yourself. That was the heart of Moore’s speech because, as The Imitation Game’s characters repeat throughout the movie, “it’s the very people who no one imagines anything of who do the things no one can imagine.” 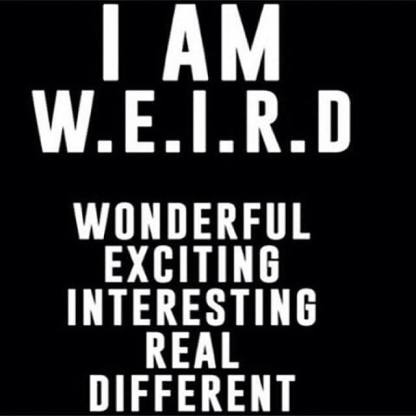 “As it appears in …. full read/credit”

Graham Moore spoke out about his attempted suicide and sent an inspiring message to young people everywhere. He won the Oscar for best adapted screenplay for The Imitation Game. In his speech, he mentions his struggle with depression and consideration of suicide.

Moore won Best Adapted Screenplay for “The Imitation Game” at Sunday’s Oscars, and he used the win to give a powerful speech about suicide awareness and depression.

“I tried to commit suicide at 16 and now I’m standing here,” he said. “I would like for this moment to be for that kid out there who feels like she doesn’t fit in anywhere. You do. Stay weird. Stay different, and then when it’s your turn and you are standing on this stage please pass the same message along.”

“The Imitation Game” is about the life and achievements of the late Alan Turing, the British mathematician and cryptanalyst who helped solve the Enigma code during World War II. After the war he was prosecuted for homosexuality in Britain and died by suicide in 1954 at 41 years old. 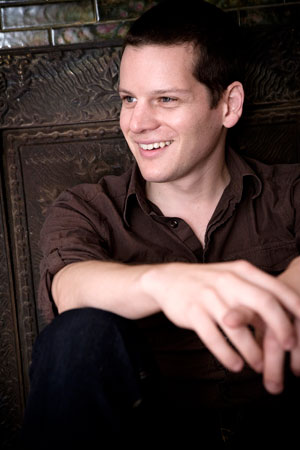 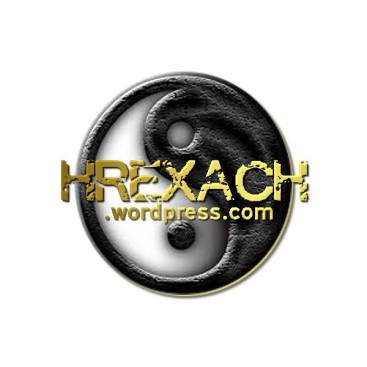