It was 42 years ago today when Tony Orlando & Dawn held the #1 spot on the charts with “Tie a Yellow Ribbon Round the Old Oak Tree” in 1973.

“Tie a Yellow Ribbon Round the Ole Oak Tree” is a song by Dawn featuring Tony Orlando. It was written by Irwin Levine and L. Russell Brown and produced by Hank Medress and Dave Appell, with Motown/Staxbacking vocalist Telma Hopkins, Joyce Vincent Wilson and her sister Pamela Vincent on backing vocals. It was a worldwide hit for the group in 1973.

In 2008, Billboard ranked the song as the 37th biggest song of all time in its issue celebrating the 50th anniversary of the Hot 100.

The song is told from the point of view of a prisoner who has completed his three-year sentence but is uncertain if he will be welcomed home.

He writes to his love, asking her to tie a yellow ribbon around the “ole oak tree” in front of the house (which the bus, bringing him home from prison, will pass by) if she wants him to return to her life; if he does not see such a ribbon, he will remain on the bus (taking that to mean he is unwelcome) and understand her reasons (“put the blame on me“). He asks the bus driver to check, fearful of not seeing anything.

To his amazement, the entire bus cheers the response – there are 100 yellow ribbons around the tree, a sign he is very much welcome.

~~Tie a Yellow Ribbon Round the Ole Oak Tree~~ 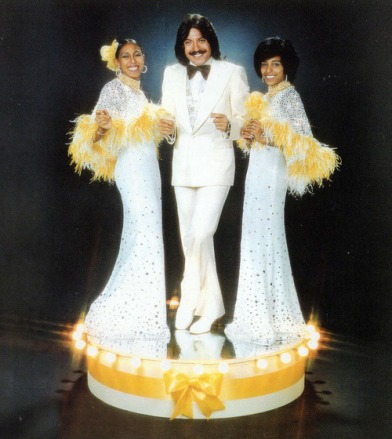