“War Against All Puerto Ricans breaks out on NEW YORK 1”!! Awesome … 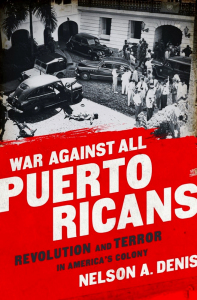 It was bound to happen.

There was no way to avoid it.

Errol Louis invited Nelson Denis to New York 1, and War Against All Puerto Ricans broke out in the studio of Inside City Hall.

On June 10, 1948, they passed Law 53, otherwise known as La Ley de la Mordaza (Law of the Muzzle). This law was nearly a word-for-word translation of Section 2 of the U.S. anti-Communist Smith Act, and it authorized police and FBI to stop anyone on the street and invade any Puerto Rican home, particularly Nationalist homes.

It was a gag law. It prohibited the singing of a patriotic tune; or to own or display a Puerto Rican flag anywhere, even in one’s own home, no matter how large or small.

It also prohibited any speech against the U.S. government or in favor of Puerto Rican independence…