Maybe ….. awareness! It had to start somewhere. #CecilTheLion #WalterJamesPalmer ….. It’s not a competition. #BeTheirVoices zzzz

Take action and ask your congressional representative to intervene with some anti-trophy legislation and the AG to extradite. 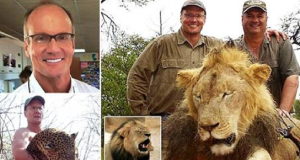 There is probably not a single human in the U.S.A. who has yet to hear about the demise of Cecil the lion.  Cecil, a male lion who lived in the  in Matabeleland North, Zimbabwe, Africa, was a major attraction at the Hwange National Park and was being studied and tracked by Oxford University as part of a larger study.

On 1 July 2015,  Cecil  was shot and killed by Walter Palmer, an American recreational big-game hunter, who had brutally wounded the lion with an arrow, some 40 hours earlier. The internet blew up with stories and comments about the killing, drawing international media attention, and sparking outrage around the world.  Public, politicians and celebrities have called for action against Palmer, who has been forced to…