Here’s the next clown. Correction: if you listen to the gun, it’s not even a machine gun!!
That’s one slimy, sneaky, unappealing face! Evokes disgust & trepidation in me. 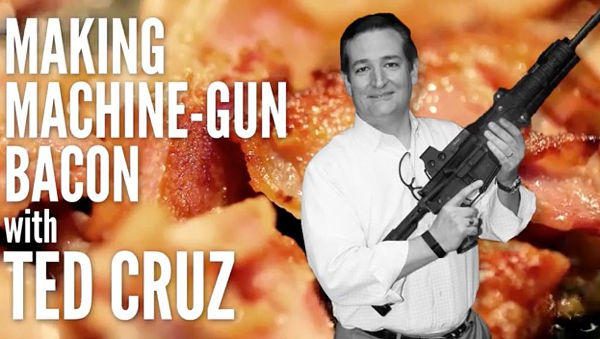 Just a reminder TFC readers:  When reading the stories on this blog, remember our motto: “Sorting out the crazies!”

In his ongoing quest to stay relevant in a GOP race where Donald Trump has sucked up most of the political oxygen on the far right, Ted Cruz has released a video of himself cooking bacon with a machine gun. The short video, which appears onIJReview’s web site shows Cruz wrapping bacon around the barrel of a machine gun, covering it with aluminum foil, and then firing several rounds off, until the bacon is cooked to a crisp.

Cruz kicks off the video by proudly proclaiming:

Of course, in Texas, we cook bacon a little differently than most folks.

After emptying four magazines full of bullets he peels the cooked bacon off the barrel of his gun and then bites into it, giggling as he…