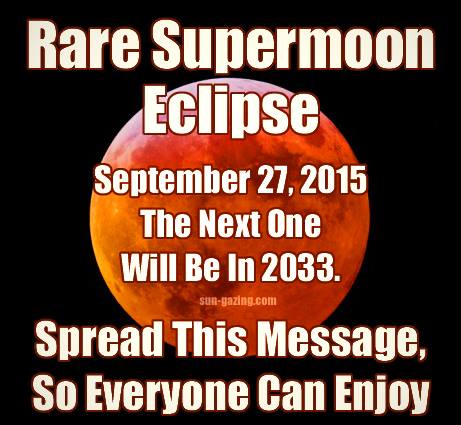 THIS IS VERY SPECIAL …. DON’T MISS IT!

Rare Eclipse of a Supermoon

The full Moon of September 27/28 is a Supermoon – the Moon will be closest to the Earth. or at its perigee, as it turns into a full Moon. A rising Super Full Moon can look larger and brighter to spectators on Earth.

People in the US Will Get Front Row Seats

People in eastern and central areas of the United States and Canada will have some of the best views of the Total Lunar Eclipse on the night of September 27, 2015, weather permitting. Here, the eclipse will begin after moonrise and finish around midnight (00:00 on September 28).

While North and South Americans will be able to see the eclipse after sunset on September 27, 2015, people in Africa, Europe and Middle East can view it during the early hours of September 28, before the Sun rises.

No Need for Eye Protection

Lunar eclipses can be spectacular and they are easy to see with the naked eye. Unlike solar eclipses, which require protective eye wear, a lunar eclipse can be viewed without specialized eye wear.

Solar and lunar eclipses come in pairs – a lunar eclipse always takes place two weeks before or after a solar eclipse. The September 27/ 28, 2015 Total Lunar Eclipse will be preceded by aPartial Solar Eclipse on September 13, 2015.

It’s Part of a Lunar Tetrad

The September 28, 2015 Total Lunar Eclipse is the fourth and final eclipse in a series of four total lunar eclipses called the lunar tetrad. The first three eclipses of the tetrad took place on April 15, 2014, October 8, 2014 and on April 4, 2015.

Notice something interesting about the dates?

Each of the eclipses in the tetrad occurs about 6 months apart and have 5 full Moons between them! 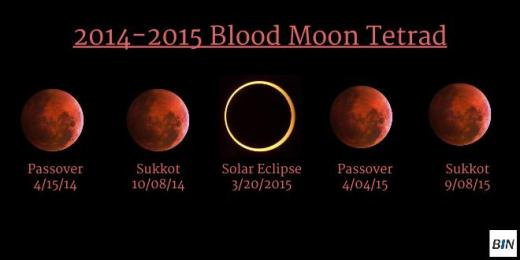 It’s Being Called a Blood Moon

In recent years, the term Blood Moon has been frequently used to refer to total lunar eclipses. Some sources suggest that the term stems from the Bible. Christian pastors Mark Blitz and John Hagee claim that the eclipses of the 2014-2015 lunar tetrad fulfill a Biblical prophecy of forthcoming difficult and trying times. 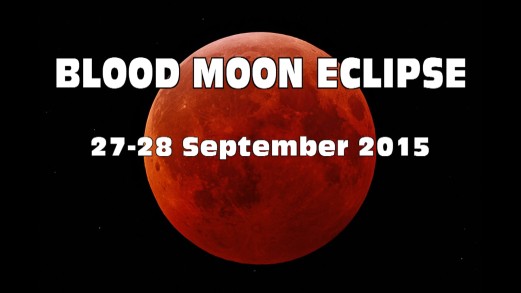 Despite Rumors, the World Will Not End

The views of pastors Blitz and Hagee gathered attention in early 2014, because the eclipses in the tetrad coincide with important Jewish festivals. The eclipses in April 2014 and April 2015 occured at the same time as Passover, while the October 2014 andSeptember 2015 eclipses occur during the Feast of Tabernacles. Some people took this coincidence as a sign of the end of times.

Others have dismissed any apocalyptic significance of the tetrad. Data of past eclipses show that at least eight lunar tetrads have coincided with Jewish holidays since the First Century.

It will Happen on Harvest Moon

The Lunar Eclipse on September 27/ 28, 2015 will occur during the Northern Hemisphere’s first fall (autumn) full Moon. Called the Harvest Moon in many northern cultures, it is the full Moon closest to the September Equinox, and is astronomically significant. 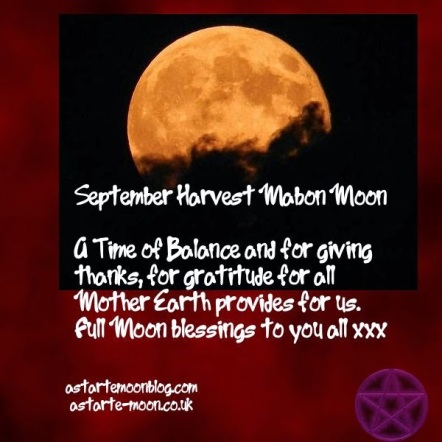 It is Part of Lunar Saros Series 137

2015 has 4 eclipses, the minimum number of eclipses that can happen in a calendar year. The September 28 Total Lunar Eclipse marks the last eclipse of the year. It will be preceded by a partial solar eclipse on September 13, 2015.

The first eclipse of the year, a total solar eclipse took place on March 20. Two weeks later, on April 4, 2015 the first lunar eclipse of 2015 took place.

There is a total eclipse of the moon on the night of September 27-28, 2015. It happens to be the closest supermoon of 2015. It’s the Northern Hemisphere’s Harvest Moon, or full moon nearest the September equinox. It’s the Southern Hemisphere’s first full moon of spring. This September full moon is also called a Blood Moon, because it presents the fourth and final eclipse of a lunar tetrad: four straight total eclipses of the moon, spaced at six lunar months (full moons) apart. Phew!

Full Moon Names and Their Meanings

Full Moon names date back to Native Americans, of what is now the northern and eastern United States. The tribes kept track of the seasons by giving distinctive names to each recurring full Moon.

Their names were applied to the entire month in which each occurred. There was some variation in the Moon names, but in general, the same ones were current throughout the Algonquin tribes from New England to Lake Superior.

European settlers followed that custom and created some of their own names. Since the lunar month is only 29 days long on the average, the full Moon dates shift from year to year. Here is the Farmers Almanac’s list of the full Moon names.

This full moon’s name is attributed to Native Americans because it marked when corn was supposed to be harvested. Most often, the September full moon is actually the Harvest Moon, which is the full Moon that occurs closest to the autumn equinox.

In two years out of three, the Harvest Moon comes in September, but in some years it occurs in October. At the peak of harvest, farmers can work late into the night by the light of this Moon. Usually the full Moon rises an average of 50 minutes later each night, but for the few nights around the Harvest Moon, the Moon seems to rise at nearly the same time each night: just 25 to 30 minutes later across the U.S., and only 10 to 20 minutes later for much of Canada and Europe.

Full Moon Names and Their Meanings

In the US, Canada, and Central and South America, this rare Total Lunar Eclipse of a Supermoon will begin on the evening of September 27, 2015.

In Europe, South/East Asia, Africa, the Arctic, and in the Pacific, Atlantic, and Indian Oceans it starts after midnight on September 28, 2015 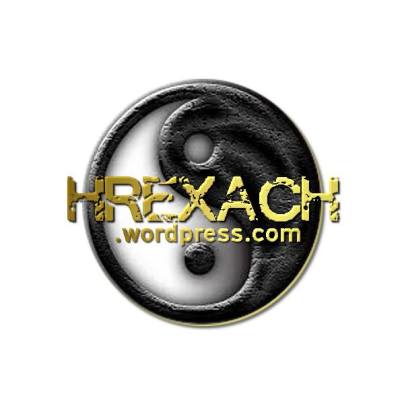