The dancing on Halloween Night was awesome.

I loved every bit of it.

Granted …. #TeamNightmare did a great job.

Kudos to the winners.

The fog machine was in full force on “Dancing with the Stars” Halloween edition, October 26, 2015. Each couple danced to scary music with spooky costumes, performing as witches, vampires, werewolves and zombies.

The main event of the night was the team competition.

Captained by Bindi Irwin, #TeamWhoYouGonnaCall danced to the “Ghostbusters” theme song, with the men doing lifts with their partners while dancing on hover boards. The judges enjoyed the number. Juliane Hough called in “fun” but the team was beat out, earning a score of 28.

Captained by Nick Carter, #TeamNightmare absolutely dominated the stage in an homage to “The Nightmare Before Christmas,” all dressed as Halloween Jack. The routine earned a perfect score the judges. Bruno described the performance “like watching a Broadway show, with a crisp and clear storyline.” 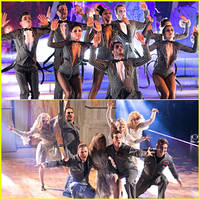