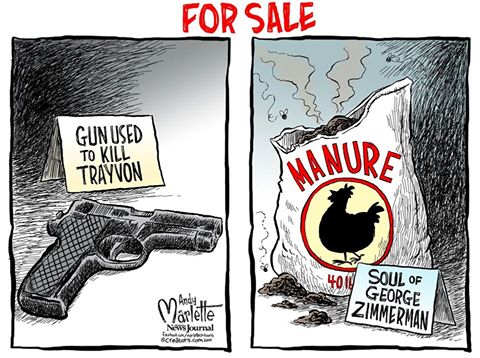 THE “GIFT” THAT KEEPS ON GIVING

There are no words.

In my humble opinion, the cartoon says it all.

George Zimmerman has been making headlines for auctioning off the gun he used to shoot and kill Trayvon Martin.

Now the weapon has sold for more than $120,000 on UnitedGunGroup.com.

TMZ reported that seven verified users were bidding for the gun. The identity of the winning bidder remains unknown, as is the exact final selling price.

He lives and works in Pensacola, FL

Born and raised by underpaid public school teachers in Sanford, Fla., Andy Marlette graduated from the University of Florida and became staff editorial cartoonist at the Pensacola News Journal in 2007.