“Democracy does not require uniformity. Our founders quarreled and compromised, and expected us to do the same. But they knew that democracy does require a basic sense of solidarity — the idea that for all our outward differences, we are all in this together; that we rise or fall as one.”  President Obama in his farewell address.

On January 20, 2017, President Obama will pass the baton to president-elect Donald Trump. 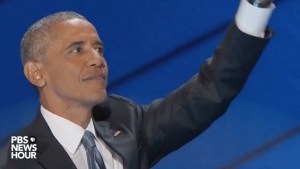 As this nation’s first Black President, it was anticipated that Obama would address race issues in America.  Some were pleased when he did, and others criticized him and accused him of causing a racial divide.  In his farewell address, President Obama hit the proverbial nail on the head when saying, “Laws alone won’t be enough.  Hearts must change.”

He urged Whites to understand that protests by minorities are “not demanding special treatment, but the equal treatment our Founders promised.”