‘The co-founder of Google, Sergey Brin, immigrated to the U.S. when he was a small child, so the Drumpf’s immigration fiasco hit him hard.

Brin was born in Moscow, and his family of Russian Jews fled in the 1970’s.

Fred Toyosaburo Korematsu (January 30, 1919 – March 30, 2005) was an American civil rights activist who objected to the internment of Japanese Americans during World War II. Shortly after the Imperial Japanese Navy launched its attack on Pearl Harbor, President Franklin D. Roosevelt issued Executive Order 9066, which authorized that individuals of Japanese ancestry living on the West Coast were to be removed from their homes and forced to live in internment camps, but Korematsu instead challenged the orders and became a fugitive.

The legality of the internment order was upheld by the Supreme Court of the United States in Korematsu v. United States; this ruling has never been explicitly overturned. Korematsu’s conviction for evading internment was overturned decades later after the disclosure of new evidence challenging the necessity of the internment, evidence which had been withheld from the courts by the U.S. government during the war.

To commemorate his journey as a civil rights activist, the “Fred Korematsu Day of Civil Liberties and the Constitution” was observed for the first time on January 30, 2011, by the state of California, the first such commemoration for an Asian American in the United States. 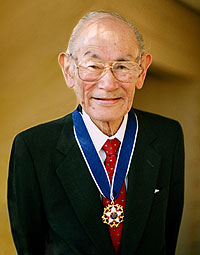 In 2015, Virginia passed legislation to make it the second state and first commonwealth to permanently recognize each January 30 as Fred Korematsu Day.

The Fred T. Korematsu Institute was founded in 2009 to carry on Korematsu’s legacy as a civil rights advocate by educating and advocating for civil liberties for all communities.