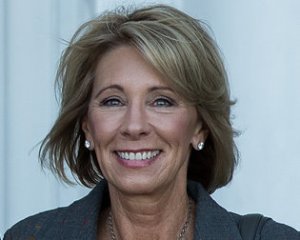 Betsy Devos’s wants to give parents a lot more say in educating their kids. And since parents get the most say when they educate their kids on their own, her plan would make homeschooling the only way to give your kids a good education.
Image source: NYTimes

This Tuesday, the Senate has voted to confirm a billionaire/activist Betsy DeVos as Secretary of Education, despite the fact that she has no relevant education or experience, other than lobbying for more charter and religious schools, and donating millions of dollars to politicians. Oh, and she thinks schools need guns for protection against grizzlies. The vote was very close and Vice President Mike Pence had to be briefly released from the storage where he has been kept since the inauguration to cast the tie-breaking vote. Here are 10 reactions to her confirmation.

1)  Ivanka Trump: “Betsy DeVos is a great role model for…