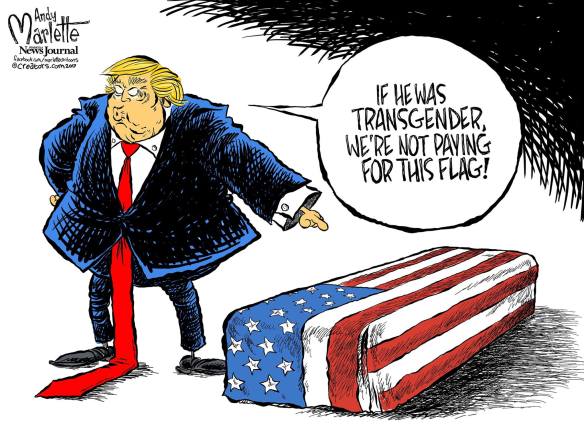 This sorry excuse of a human being has always been a heartless, empty shell who throws away his personal opportunity to occupy a space in this universe.

Thought I didn't need any other reason, this action solidifies it for me.

I was never in the military but I worked with the Veterans Administration for almost 28 years. I know what these guys go through.

No need to add more burden.

You are a worthless 'human' and you prove it daily!

Drumpf announced on Wednesday morning, July 26, that transgender individuals would no longer be allowed to serve in the military. With one swoop, Drumpf went overwhelmingly against popular opinion and solidified his place as the most out of touch and despised president in history.

Trump’s move wasn’t about victory or the military.

It was all about throwing his slipping base a bone.

Drumpf is falling faster than a rock in the polls, so he is doing everything that he can to hold on to his declining base of support.
A majority of Americans oppose discriminatory laws such as bathroom bills towards transgender individuals. Drumpf’s move is a step backward for civil rights, and another effort to erase the progress and achievements of the Obama presidency.

The LGBTQ community warned that Drumpf would take this type of action if he won the election, and their warnings are being proven correct. Drumpf isn’t trying to make America great. He never intended to.

He is trying to undo progress and take America back to an uglier time.

It won’t work. Progress always wins in the end.

"As it appears in … full read/full credit"

He lives and works in Pensacola, FL

Born and raised by underpaid public school teachers in Sanford, Fla., Andy Marlette graduated from the University of Florida and became staff editorial cartoonist at the Pensacola News Journal in 2007.