“The U.S. government should support the people in Puerto Rico as it does in other disaster relief efforts.’ … yet we have seen how short the mighty, imperialistic U.S. of A. has ‘complied’ with their responsibility, haven’t we? 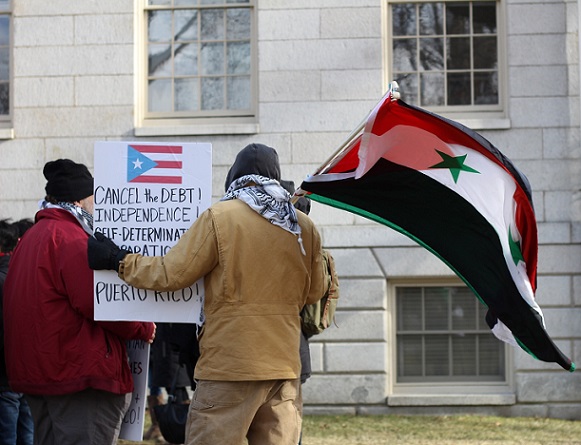 William L. Wang (The Harvard Crimson) reports on today’s march at Harvard University, where hundreds of protesters urged Harvard to divest from the Boston-based Baupost Group unless the hedge fund cancels its holdings of Puerto Rican debt. According to El Nuevo Día, there will be a similar march tomorrow at Yale University (stay tuned for other protests at Columbia University and University of Phoenix).

The protest, organized by Harvard affiliates and local activist organizations, ispart of a series of protests calling for higher education institutions to divest from financial groups with significant Puerto Rico debt holdings. Rallies at Yale University, Columbia University, and the University of Phoenix are slated to take place within the next week.

Armed with signs reading “Drop the Debt” and “Harvard Divest from Baupost,” protesters marched through Johnston Gate, walked past the School of Education, and concluded the march at Harvard Business School.