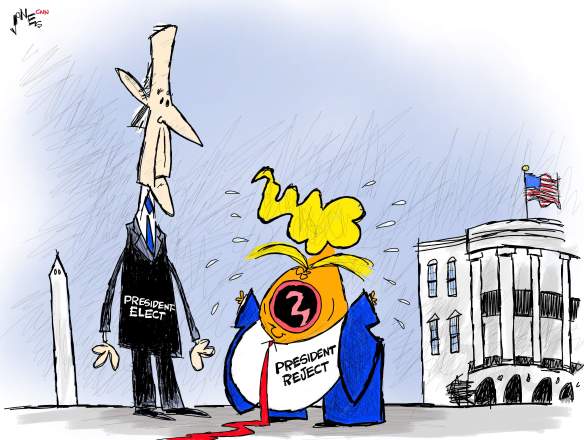 Here’s your cartoon for this week’sCNN Opinion newsletter. Pleasesign up to get these in your inbox every Sunday.

In fact, for this week’s newsletter. I drew TWO cartoon.

In the first cartoon, I wanted to show the contrast between Donald Trump and Joe Biden. I’ve seen a few other cartoonists do this also.

With Biden, you have a president-elect calling for unity. He’s already building his government.

In Donald Trump, here’s a man refusing to concede and engaging in wild conspiracy theories in order to cling to power. In firing his Defense Secretary, he’s dismantling his government. For their part, the GOP is enabling him. They keep saying we need to count every “legal” ballot, ignoring the fact we don’t have an abundance or any clear signs there are illegal ballots. It’s not like you go to a restaurant and say you only want food that’s not…

ADIOS!! … “Trump lost the popular vote … TWICE!!! He’s only the 11th president to lose his reelection bid (out of 45). He’s the first one-termer since George H. W. Bush. And on top of all that, he was impeached. But bad presidents should only serve one term. Donald Trump was lucky to last that long.”

The Donald Trump experiment is over and even though it’s been four years, it was a failure from day one.

On day one, the very first thing that a President (sic) Donald Trump did was send his spokesgoon, Sean Spicer, out to lie to the American public about crowd sizes.

The very first official business of this president (sic) was to lie to the people he served about something petty that only served his fragile ego.

Donald Trump has much to be insecure about. He’s not very smart. He’s not well-liked. He’s not a successful businessman. He wouldn’t have ever been successful with women if he wasn’t rich. He’s not attractive. He’s losing his hair. He’s overweight. He’s not a good president (sic) or even barely capable. He can’t grasp facts. And most of all, he’ll never be as good as President Obama. Now Donald Trump has so much more…

World reacted to Biden win like U.S. overthrew a dictator!

You may imagine the joy of those 75 million + of us who voted for him!!

It’s been a harrowing weekend for me. After the ‘election week’ we have collectively gone through and the weekend shenanigans going on – not conceding, raising funds for Drumpf, much bravado, GOPers total disloyalty and sedition … add your own … it was refreshing to listen to President Biden’s short announcement about his plans to deal with COVID-19.

I can breathe a bit easier … let’s continue on this path.

I still can’t say ‘a time to heal’ because that intends working together. I’m very much aware that this will be necessary but …

I’M NOT READY TO MAKE NICE YET!

(it’s a good thing I’m not in government anymore!)