Very well said … “As for Trump, when we exorcise him, we’re not trying to save him. We’re trying to save our nation, our democracy, our Constitution, the United States of America.
We need to exorcise MAGA.” 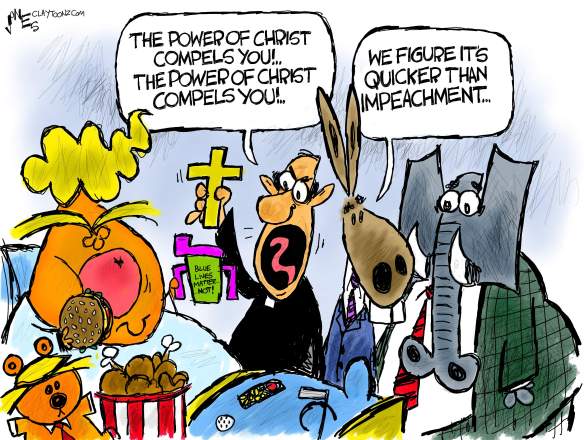 The House of Representatives will most likely impeach Donald Trump tomorrow…for a second time.

Donald Trump will be the only president to have been impeached twice…and deservedly so. This time, there may be a few Republicans voting yes. Last time, not one single Republican in the House or Senate, except Mitt Romney, thought it was wrong for Donald Trump to ask a foreign nation to help him win reelection. This time, only most of them don’t think it’s wrong for an American president to incite terrorists.

The really ridiculous part of this is, Republicans in Congress don’t want to impeach or remove Trump after he sent terrorists…to attack THEM.

One of my dumbass MAGA cartoonist colleagues wrote that it was kinda nice watching Democrats “cower in fear.” Dumbass. Republicans were cowering in fear too. The terrorists had zip ties and they probably weren’t just seeking out Nancy Pelosi, Alexandria Ocasio…