THIS … and more happened!! … “Trump’s lawyers had 16 hours to present their defense, but who can say “fight” for 16 hours other than Donald Trump? They wrapped it up with four. But still, four hours of bullshit and debunked conspiracy theories was very hard to take.” 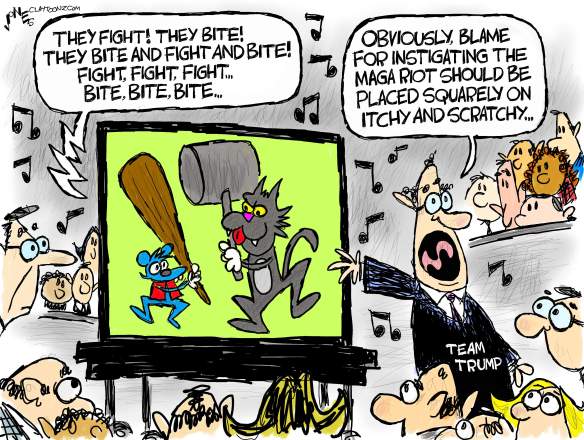 If you were playing a drinking game during day 4 of the Trump Trial in the United States Senate where you took a drink each time the word “fight” came from the Trump defense team, you’re dead.

Trump’s lawyers attempted to confuse the jury of senators, and the rest of the nation, that the trial isn’t about inciting a terrorist attack, but one of free speech. They complained that all the video evidence the House Impeachment managers presented was manipulated and edited…and then proceeded to show video evidence that was manipulated and edited.

The lawyers Trump hired to replace the lawyers who replaced the lawyers who didn’t want to present a defense of conspiracy theories showed video after video of Democrats saying the word “Fight.” See? There’s proof that when Trump said “fight,” no harm was intended. We’re not prosecuting Democrats for saying “fight,” right?

Except…name one time that there…