I found the video!!

It’s been released to the YouTube-verse!!

Pink delivered a delightful live debut of her new song, “Never Gonna Not Dance Again,” as she opened the 2022 American Music Awards on Sunday, November 20.

The singer showed up to the awards show on rollerskates and transformed the Microsoft Theater into “Pink’s Rink,” accompanied by a large set of dancers as she emulated the positive energy of her new single.

Fun fact: it’s impossible not to smile during a live P!nk performance!

He’s our local celebrity, our small business owner, our almost-elected official, our local activist, our philantropist, a very dear friend and so much more. Once again he writes about the ‘hot’ climate out there which is placing many members of our LGBTQAI+ community in so much danger.

Colorado Springs shooting — the case in point these days.

“My heart goes out to the victims, Club Q patrons, and their loved ones. I cannot even fathom what the families of those killed  are going through right now,” Leigh stated.

“All we have to do is think back to the Pulse Nightclub attack from 6 years ago, and we can feel the pain that our community is still living today.”

“Stop this violence … and stop this rhetoric. Let’s focus on protecting our people and our lives.  We need to stop all of the noise that empowers hateful people to silence a human body … a human being … a human soul.”

“My condolences go out to all the families who lost someone in this tragic event, and to everyone struggling to be accepted in this world. My sister was a good person. She was loving and caring and sweet. Everyone loved her. Kelly was a wonderful person,” Tiffany Loving said in the statement to CNN.

Derrick Rump was a bartender at Club Q who had “found a community of people that he loved really much, and he felt that he could shine there – and he did,” his sister Julia Kissling told CNN affiliate WFMZ.

“He made a difference in so many people’s lives, and that’s where he wanted to be.”

Raymond Green Vance, 22, was visiting Club Q for the first time with his longtime girlfriend, her parents and some of her parents’ friends, his family said in a statement provided to CNN.

They were celebrating a birthday, according to the statement. The people Vance was dining with included Richard M. Fierro, the man who subdued the suspected gunman, according to a Facebook post by his wife Jessica Fierro.

Aston, 28, was a bar supervisor at Club Q, said bartender Michael Anderson, who had known Aston for a few years and considered him a friend.

“He was the best supervisor anybody could’ve asked for. He made me want to come into work, and he made me want to be a part of the positive culture we were trying to create there,” Anderson said.

“She meant everything to this family, and we can’t even begin to understand what it will mean to not have her in our lives,” the statement read.

Paugh was a mother, and her daughter Ryleigh “was her whole world,” the statement read, adding that Paugh was big on family.

“She loved her dad, her sister, and her family; Ashley was a loving aunt, with many nieces and nephews who are devastated by her loss,” the statement read.

In total agreement!! It will be worse than a clown show!! … “In other words we can expect nothing of substance coming out of the Congress in 2023 … headline grabbing bullsh*t … more theater … more antics … more drama with no basis!!”

To begin a cartoon by Pat Bagley…. 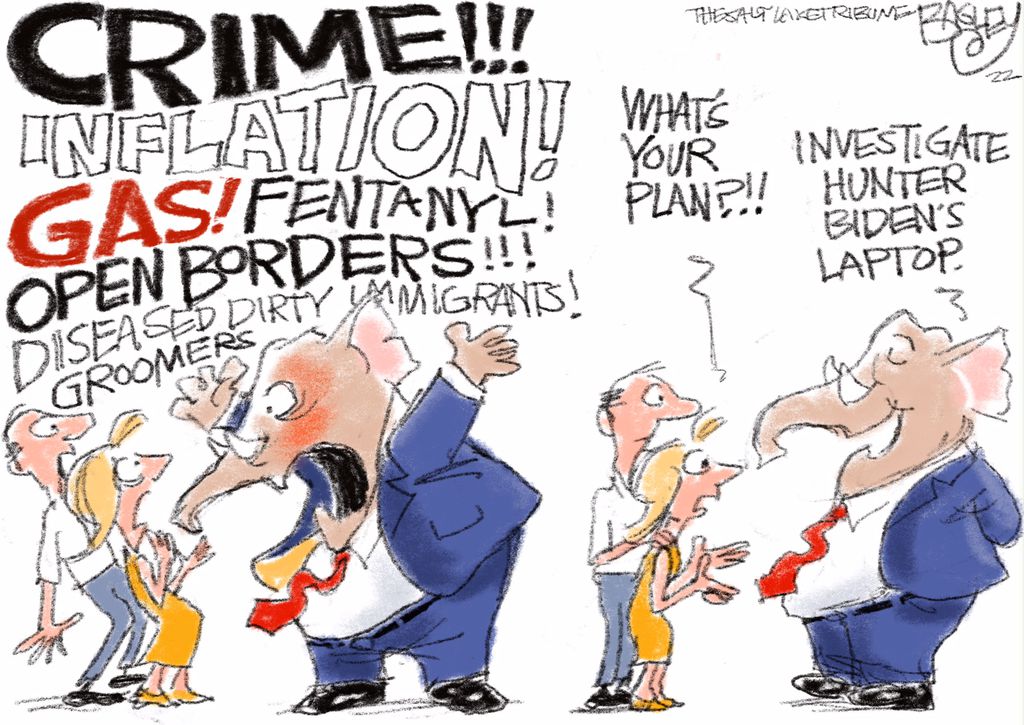 2023 will give this country a new Congress and a divided Congress….but what can we expect from this division?

This may put pressure on obstinate Democratic Sens. Joe Manchin and Kyrsten Sinema to compromise so Congress can get a few things passed before the end of the year — namely abortion protections and voting rights, as they’ve been supportive of efforts to codify same-sex marriage protections — while Democrats still lead both houses, says Sunshine Hillygus, political science professor at Duke University.

Come January, Hillygus predicts that not many bills will get passed. “I don’t see a lot of room for forward progress.”

“It’s not just a matter of…

This is ‘Club Q‘ in Colorado Springs. The gay club where another ignorant, intolerant, filled with hate ‘person’ with an assault rifle, took the lives of 5 patrons and injured 15.

As when PULSE happened in Orlando, it couldn’ve been me.

In Colorado, hate crimes are known as “bias-motivated” crimes. Colorado law defines bias-motivated crimes as intimidation, harassment or physical harm that is motivated at least partly by bias against a person’s race, religion, nationality, age, disability or sexual orientation.

This is the only way to go.

All of us have the right to exist … a peaceful and safe existence.

If any of my TRANS brothers and sisters don’t get it, then … expect what the ‘natural’ reaction would be in any human.

Couldn’t have expressed it any better.

Yup, I know. I gave you an Elon/Twitter cartoon yesterday. But here’s the thing, kids…

I wrote this idea Friday and planned to draw it Saturday, but then Merrick Garland appointed a Special Counsel to investigate Trump, so this cartoon got pushed to Sunday. But then on Saturday night, Elon reinstated Trump to Twitter, so this got pushed to Monday.

However, it almost got pushed back to never because I really wanted to draw something on the shooting in Colorado Springs today…but three factors got in the way of that.

Factor number one: I felt I needed to give my clients something with a Thanksgiving theme. Being that this is Monday, this is probably the latest I can get it to them for this week.

Factor two: I traveled today and went through multiple airports and it has left me very tired, so it was easy to fall back on…

Hey, WALLY!! … “i’ll be close by right here to rescue him forever when he’s in trouble. ok friends, it’s wally’s nap time. have a great day.”

hello everyone, wally here. i’m helping dad with his planks, planks so his back doesn’t flare up.  any-who, back to dad.  just look at him. what is flaring up are his ears, his face & the veins on his forehead, we have like a medical emergency here so it is wally to the rescue. i first crawled underneath dad hoping to prop him up & dad shouted that this “wasn’t bloody helpful walter.” dad calls me walter when i’m making trouble. still, something was very wrong here. dad was breathing so heavy, and his face was like a tomato, and his arms trembling, i think he was hallucinating & he must be playing the opposite game. so i grabbed the knot in the drawstring from his hoodie & started reefing on it trying to pull dad down. his elbows were broken & wouldn’t come down. “WALLY, GET OUT!” dad looked…