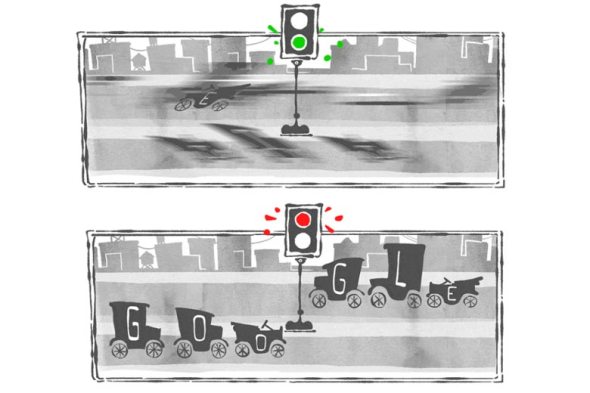 Today’s Google Doodle celebrates the 101st anniversary of the first ever electric traffic light, which was installed at the corner of 105th and Euclid in Cleveland, Ohio, relieving police officers of the unenviable task of standing in the middle of a busy intersection and directing traffic.

Previous solutions to the task of controlling traffic were labor intensive and fraught with hazards. While gas-lit traffic signals had appeared in England before the 1900s, they had a tendency to explode, according to Google. Another solution of “stop” and “move” signs still relied on human attendants.

While the introduction of the electric traffic light helped change the rules of the road, the first one only included red and green lights, forcing drivers to rely on their quick reflexes to stop on a red.

The jarring stops are displayed in the Google Doodle by Nate Swinehart, showing what life was like before the yellow light, which came along a few years later.

The animated doodle shows cars with the letters spelling ‘G-O-O-G-L-E‘ halting at a red traffic light and then rushing past it as it turns green.

While it was an American policeman Lester Wire, in Utah, who first developed an electric traffic light in 1912 and used red-green lights, the American Traffic Signal Company installed a traffic signal system on the corner of East 105th Street and Euclid Avenue in Cleveland, Ohio two years later on 5 August 1914.

The early twentieth-century intersection was a strange scene. While the world’s largest automobile manufacturer sold over 20,000 cars a month in 1914, horse-drawn wagons and carts still crowded the streets, and accidents became increasingly frequent. Intersections in major cities were congested, and traffic was directed by police officers who stood in the middle of chaotic highways waving their arms.

Gas-lit stoplights appeared in England before the turn of the century, but these had a tendency to explode, and mechanically operated signs that displayed the words “stop” and “move” still relied on traffic attendants.

The electric traffic signal was first installed in Cleveland, Ohio on August 5th, 1914.

Notice that it was having only Green and Red lights, there was no yellow light that time.

Words from Rose … about her son … with her granddaughter

Leilani: “G-Ma, I told mommy yesterday, wouldn’t it be cool to go to G-Ma’s house and JoJo was alive? I know he’s still with us even though he’s in heaven … But I miss him.”

Me: (smiling through tears) “That WOULD be cool, mama…. I miss him too”

A dear blogger friend taught me about this concept.

We’ve always known Lady Gaga is a special lady but what’s marked her apart in the past is her crazy outfits and outlandish stage performances.

So, we were left open-mouthed when Gaga took to the stage at the Oscars in Los Angeles on Sunday night to pay tribute to The Sound of Music.

The singer showed off a VERY different side to her vocals to mark the 50th anniversary of the musical film and sounded AMAZING!

Mother Monster opened her performance with The Hills Are Alive before moving on to My Favorite Things and Edelweiss and ended with a glass-shatteringly high note in Climb Every Mountain.

The audience was clearly impressed as they gave Gaga a huge round of applause and a standing ovation.

But the surprises didn’t stop there – Julie Andrews, who plays Fraulein Maria in the movie, joined Gaga on stage for a hug afterwards before Julie presented the award for Best Original Score. 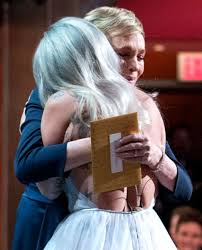 As life had it, as well as the legal wheels and powers that be, in the state we live in, marriage equality became a reality.

We really didn’t “need” this recognition because the union and commitment we have for each other didn’t need the “famous piece of paper“. We know who we are, we know what we feel for each other and we know where we are headed.

But today is a special day … it’s one of very many! All of these special days will be celebrated because we celebrate life as is …. and we consider ourselves to be very blessed!!

One of our many favorites. So very special when we reconnected!!