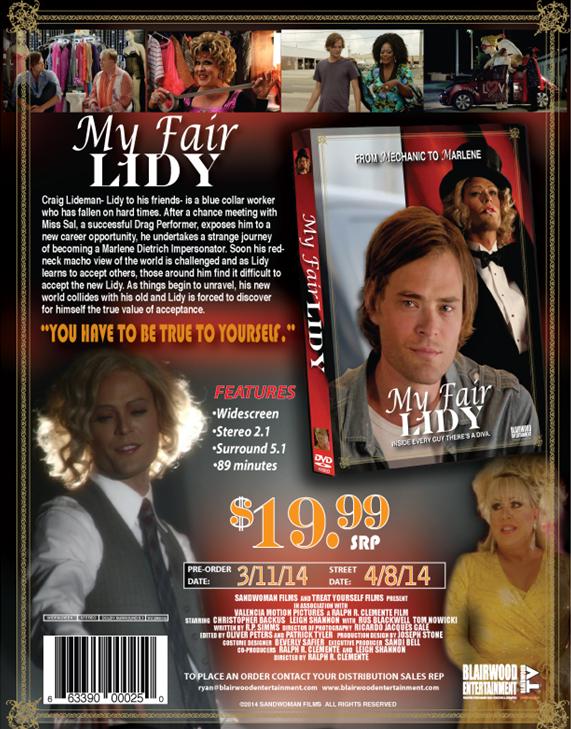 -YOU HAVE TO BE TRUE TO YOURSELF-

I live in Orlando, Florida. There is a “hamburger joint” downtown, the very well know Hamburger Mary’s. They serve good food but my main reason for going there is for Leigh Shannon’s show.

Leigh and me have become cyberfriends. We connected at one of his shows and eventually through Facebook. We both have established a relationship based on mutual respect and admiration.

I was very happy to learn that my dear friend has ventured in the world of film. I kept track of the film’s progress through their Facebook Page:

An independent film with a fabulous flair has been released and it has ties to Central Florida. My Fair Lidy, a film by Sandwoman Films and Treat Yourself Films, had its world premiere at the StarLite Film Festival on January 23, 2014, at the Garden Theatre in Winter Garden.

The comedy/drama revolves around a blue-collar macho man, Craig Lideman (“Lidy”, played by Christopher Backus, actor and husband of actress Mira Sorvino), who by chance meets a drag performer, Miss Sal, and as a result of that meeting, he falls into a job opportunity he couldn’t possibly predict — impersonating Marlene Dietrich!

The themes of acceptance and change are prevalent throughout the film.

~~Here you have the story line, in a nutshell~~

Ralph Clemente’s “My Fair Lidy,” is a film confirming the statement that you have to be true to yourself. It presents a story in which a working-class Florida youth embraces his feminine side to the consternation of his wife and redneck buddies.

Desperate to raise the $400 needed to afford a dental procedure to fix his wife’s “snaggletooth,” the handsome young mechanic, Lidy, exploits his resemblance to Marlene Dietrich to win a prize at a local drag bar. He even learns to approximate her distinctive voice.

While the drag performers support his new career choice, Craig Liderman-Lidy’s grease-monkey pals and intolerant wife are far less accommodating. When he finally figures out that his only true friends and family members are his fellow performers at the club, a giant weight is lifted off of his back.

If the story is entirely predictable, it’s also easy to enjoy the drag acts and judge them on their merits. Christopher Backus, a dead ringer for Guy Pearce, is appealing as the Lidy/Dietrich, while the real-life female-impersonator Leigh Shannon makes the most out of the supportive Miss Sal.

Knowing Leigh Shannon as the performer that he is, I wasn’t expecting any less than what I received. I was very impressed with the quality of the acting and the filming of this movie.

The storyline addresses several factors that are the reality in our daily lives: small town mentality, redneck culture in a small town in the south of Florida, “machismo” attitude in local men, limitations in health insurance issues, bullying and violence, envy, intolerance, discrimination, adaption and the ever present need in humans to do better and to face adversity with creativity. Human beings do what they need to do to meet the challenges in life.

The film very candidly portrays the resiliency of the human spirit and the inherent need to be yourself and do what your heart desires.

“The themes of acceptance and change are prevalent throughout the film.”

Kudos to Leigh Shannon and to the whole crew involved in the production, filming and acting of this independent film. Great job!

Take a look at the trailers below. Better yet, order your own copy. Visit their official website: