-TOO LONG, TOO MANY DAYS-

Today is the 66th day since 273 Nigerian school girls were kidnapped. We ask that all of you, from whatever city/country you live, to continue to march and hold rallies. Continue to call your government leaders and tell your friends. We will not be silenced.

Every day the family at the Bring Back Our Girls headquarters in Abuja march and rally by the hundreds.

In the middle of the night on April 15, more than 300 girls were kidnapped from their school in Chibok, Nigeria. While the horrific crime — carried out by Islamist militant group Boko Haram — went largely unreported for nearly two weeks, you’ve probably heard a whole lot about the#BringBackOurGirls campaign over the last few days.

Let’s talk about the facts first:

Why did Boko Haram attack the school? The group has been terrorizing northeastern Nigeria — a region that’s half Muslim and half Christian — for almost five years with the goal of establishing an Islamic state governed by strict Sharia law. They’re ideologically opposed to Western culture, as well as the education of girls, and thus coordinated the kidnapping.

Some of the girls have escaped, but 276 are still being held captive. It’s unknown what Boko Haram intends to do with them; some believe they’ll be sold into slavery, while others contend they’ll be held for ransom. It’s also unclear what the Nigerian government is doing to help the victims, which is why activists in the African country have been holding protests and taking to social media, their frustration fueled even further by Boko Haram’s capture of an additional eight girls on May 5.

The United States has announced it’s deploying a 200-person military and law enforcement delegation to Nigeria to help in the search, and in the meantime, people all over the world are speaking out through the #BringBackOurGirls campaign.

You can see (and upload your own!) solidarity photos on this Tumblr set up by Amnesty International, and check out some of the big names showing their support below. 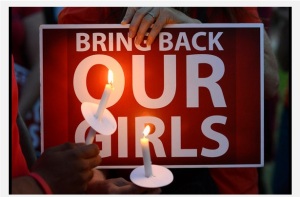 ~~Bring Back our Girls Video/project~~

With the current happenings in Nigeria and the abduction of the Chibok school girls, our hearts bleed for the future of Nigeria and what the country is turning into.

This could have been you and I … sisters, cousins, daughters, friends.

Let’s continue to fight the good fight as Nigerians!!

Reason for the kidnapping and immediate inaction of the government