He won a Grammy Lifetime Achievement Award for his work in multiple musical genres, and starred in several films, including “Labyrinth.”

David Robert Jones (8 January 1947 – 10 January 2016), known professionally as David Bowie was an English singer, songwriter, multi-instrumentalist, record producer, arranger, painter and actor. He was a figure in popular music for over four decades, and was considered by critics and other musicians as an innovator, particularly for his work in the 1970’s. His androgynous appearance was an iconic element of his image, principally in the 1970’s and 1980’s.

Born and raised in Brixton, south London, Bowie developed an early interest in music although his attempts to succeed as a pop star during much of the 1960’s were frustrating. “Space Oddity” became his first top five entry on the UK Singles Chart after its release in July 1969. After a three-year period of experimentation, he re-emerged in 1972 during the glam rock era with his flamboyant and androgynous alter ego Ziggy Stardust.

The character was spearheaded by his single “Starman” and album The Rise and Fall of Ziggy Stardust and the Spiders from Mars. Bowie’s impact at that time, as described by biographer David Buckley, “challenged the core belief of the rock music of its day” and “created perhaps the biggest cult in popular culture”. The relatively short-lived Ziggy persona proved to be one facet of a career marked by reinvention, musical innovation and visual presentation.

In 1975, Bowie achieved his first major American crossover success with the number-one single “Fame” and the album Young Americans, which the singer characterized as “plastic soul”. 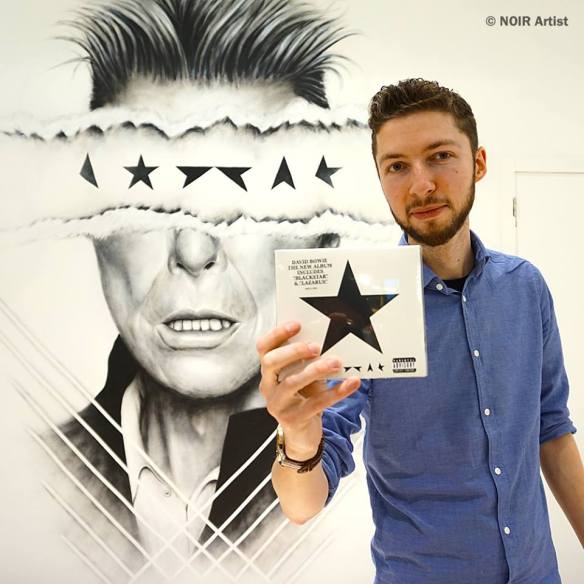 “Everybody knows me now …”

We geo-targeted this story to our Belgian FB members yesterday, but now the work is completed it’s only fair to share it FB wide.

The picture here is of NOIR Artist having completed a mural commissioned by Sony Music Belgium for David Bowie’s ★ album.

The work was created in the Toison D’ Or shopping mall in Brussels on Friday and Saturday, and the time it took to complete was used as part of a contest to win a citytrip to the David Bowie Is expo in Holland.