DO YOU CARE ABOUT ANIMALS?

DO YOU HAVE PETS?

“Until one has loved an animal, a part of one’s soul remains unawakened.”

He has posted installment #31.

Drumpf is the president, which means Keith’s not going anywhere. Catch every episode of his new GQ show, The Resistance, and then come join the fight.

~~Life in Trump’s America Just Got Worse for Your Pet~~

Love your cat or dog?

CAPTIVE FOR TOO LONG

Boycott ALL Palace Enterainment parks til she is retired!

I remember, approximately 25 years ago, I traveled to Miami Florida.

I was visiting friends.

One of the attractions that we wento to was the Miamiseaquarium.

At the time I was uneducated about the plight of this beautiful, sentient being.

As I’ve learned in recent years, it’s time to free this amazing animal.

To this day, it’s been 44 years that Lolita has been help captive in was is equivalent to a bath tub for an animal her size.

So many years have passed and she is still there.

Two years ago, I posted information about her.

The location where she lives is beyond inadequate for her.

Lolita has suffered in the same barren tank at the Miami Seaquarium for 44 years. She lives a solitary life, performing in depressing daily shows for tourists.

Her tank is the smallest for an Orca in North America, and despite being in violation of the Animal Welfare Act, the Animal and Plant Health Inspection Service (APHIS) has yet to acknowledge these glaring discrepancies.

From The Dolphin’s Point of View

The purpose of the Shut Down Palace campaign is to urge the retirement of Lolita the orca from the Miami Seaquarium, owned by Palace Entertainment.

By boycotting, protesting and raising awareness we hope one day Lolita will see her home waters again ….

~~Until Lolita is Home~~

Join the Shut Down Palace Movement

Join #ShutDownPalace in protesting across 9 states and 10 cities THIS Summer, 2016. Visit Facebook.com/ShutDownPalace for a list of locations. 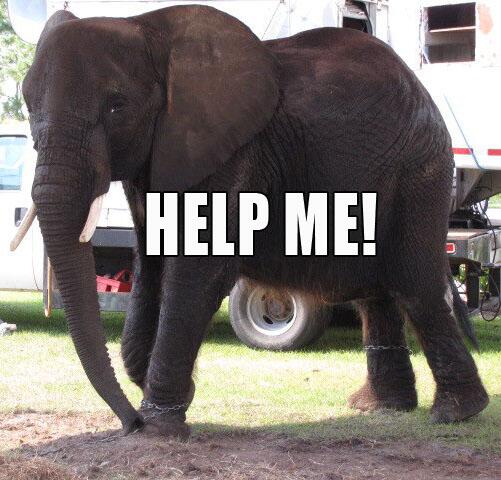 Nosey the Tortured Elephant Still Forced to Give Rides and Perform

An elephant named Nosey has been abused and neglected for years by Hugo “Tommy” Liebel, who is so heartless he may just be impersonating a human being.

Nosey is in her 30’s and has been tortured for a long time. The U.S. Department of Agriculture (USDA) even filed a formal complaint against her owner. Liebel faces close to three dozen charges of violating the Animal Welfare Act, most of which are about the luckless Nosey.

Activists made a big difference just by spreading information that Liebel would prefer to keep quiet. Liebel is trying to keep things so quiet that he renamed Nosey to help cover up his history of cruelty. He now calls her Tiny. Meanwhile, the internet strikes back: Nosey has her own Facebook page with information about upcoming performances and how to protest the companies that pay Liebel to exploit her.

In Defense of Animals (IDA) has launched a fresh campaign to persuade the USDA to get serious and retire Nosey to a sanctuary where Liebel can’t touch her. IDA reports that an eyewitness heard Liebel say he had no intention of changing his ways to comply with the Animal Welfare Act and the USDA’s order. The organization says that Nosey has spent hours locked in a trailer in over-90-degree heat, and that she never has the opportunity to walk unless a customer is riding her — otherwise she is locked up.

UPDATE: Even though it seems clear that an elephant named Nosey is in pain and struggling to walk, circus owner Hugo Liebel continues to haul her around the country and force her to give rides. The latest video evidence shows that she has been consistently lame with limited mobility for weeks. A veterinarian who reviewed recorded footage and observed Nosey in person confirmed that she is undoubtedly suffering from ongoing pain.

This is not an elephant who should be performing tricks in a circus; she should be on bed rest with a strict regimen of pampering and medical care.

~~Nosey the Elephant Needs You Now~~

Nosey, an elephant who is used for rides and forced to perform tricks by notorious animal exhibitor Hugo Liebel, has been hobbling around in pain week after week. The U.S. Department of Agriculture (USDA) has failed to take Nosey off the road, even after hearing from a board-certified veterinarian and elephant expert who observed her and concluded that she “undoubtedly suffers from advanced arthritis and degenerative joint disease, resulting in ongoing pain, and most likely permanently impaired limb function.”

Nosey needs you now. The USDA has agreed to meet with PETA representatives on September 29, and we’re depending on you to make it clear to the agency prior to our meeting that the public demands that it revoke Liebel’s license and confiscate Nosey: http://www.peta.org/action/action-ale&#8230;

“This is the worst, most prolonged, documented example of an uncorrected case of suffering and abuse in an elephant I have ever reviewed.”