Google’s 16th ‘birthday’ is being celebrated with an animated doodle on Saturday, despite September 27 not being the date of the company’s incorporation.

The first time Google created a doodle to celebrate its birthday was way back in 2002, to mark Google’s 4th birthday. Google was founded on September 4, 1998 by Larry Page and Sergey Brin. At that point in time, the two were Ph.D. students at Stanford University who didn’t know they were going to change the world forever.

Saturday’s animated doodle features the letters of Google in their iconic blue, red, yellow and green colors, with the letter ‘G’ wearing a party hat. The ‘G’, along with the first ‘O’ and ‘L’ feature stick figure arms and legs, and are the stars of the show, with the other letters remaining static throughout.

The animated Google doodle sees the letter ‘G’ marking the height of the first ‘O’, which appears to be quite excited it has grown substantially since its last measurement. The letter ‘L’ however has a point to make, running up to get its height marked off on the wall. Being of equal height with the big ‘G’, it’s no surprise the ‘L’ is much taller than the ‘O’ – which loses its excitement to see the marked difference in heights.

~never meant to be a toy~

Google has celebrated the 40th birthday of the Rubik’s Cube with an animated doodle that allows you to try to solves the puzzle online.

In traditional Google Doodle fashion – the search company chooses important dates to celebrate with special drawings and links – the honor is interactive. The corners of the cube can be twisted and turned using your mouse, allowing you to have all the faces match a single colour. Eventually perhaps.

Invented by Hungarian sculptor and professor of architecture Erno Rubik, it is believed that 350 million cubes were sold as of January 2009, making it the world’s top-selling puzzle game and toy.

There are only a handful of toys that last more than a generation. But the Rubik’s cube, now joins the likes of Barbie, Play-Doh, Lego and the Slinky, as one of the great survivors in the toy cupboard.

What makes its success all the remarkable is that it did not start out as a toy. The Rubik’s cube was invented in 1974 by Erno Rubik, a Hungarian architect, who wanted a working model to help explain three-dimensional geometry.

After a month, and using a method of rearranging the corners of each side first, he finally solved the puzzle.

Being from Hungary, then behind the Iron Curtain, it meant that Rubik took a few years to market the cube as a toy. It was shown at the Nuremberg Toy Fair in 1979 (a toy fair which has seen many great toys be launched, such as Playmobil in 1974), and was spotted as a potential hit.

It was licensed to the Ideal Toy Corp in 1980 and, by January 2009, more than 350 million units had been sold worldwide, making it the biggest-selling toy of all time.

Its heyday was in the early 1980s – it won Toy of the Year in the UK in both 1980 and 1981 – even though the great majority of children could not solve the cube and resorted to cheating by peeling off the coloured stickers.

It then fell from fashion, but never completely disappeared, thanks in part to “speed cubing” competitions, where people tried to solve the cube as quickly as possible.

The current world record for single time on a Rubik’s Cube was set by Dutchman Mats Valk in March 2013 with a time of 5.55 seconds.

Erno Rubik fashioned the first cube himself, hand-carving the ‘cubelets’. It took him one month before he was able to solve the Cube for himself.

It was licensed to the Ideal Toy Corp in 1980 and, by January 2009, more than 350 million units had been sold worldwide, making it the biggest-selling toy of all time and a retro favourite for anyone who was young in the 80s.

The cube’s six faces are each made up of nine stickered squares, with each row and column being independently manipulable around a central pivot, meaning that squares can be moved to different positions on the 3D cube, with the aim of the puzzle being to return the cube to its original configuration, with each face one colour: red, blue, white, green, yellow and orange.

It is very hard.

‘Speedcubers‘ race each other to complete cubes in speeds as fast as six seconds, while every legally muddled cube is solvable in just 20 moves. There are in fact over 43 quintillion permutations of the cube – that is, unique distributions of the 54 coloured squares over the six faces.

In the Google animation, the cube is at first shown performing a simple loop, with a basic version of the company’s logo showing up in coloured squares on a white cube.

When you click on it, however, the cube enlarges and becomes fully coloured, and allows the user to rotate the rows and columns horizontally and vertically, and manipulate the cube as a whole, thus playing it properly. 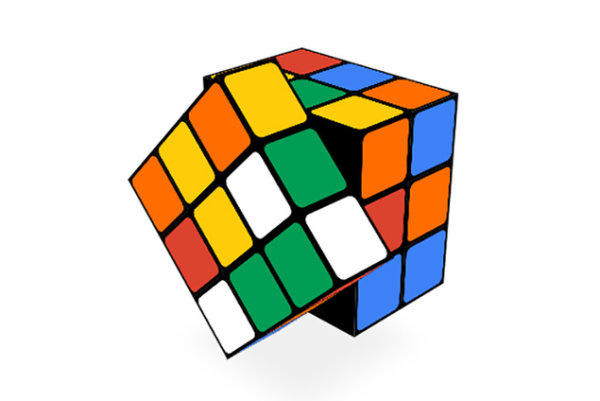 Google Doodle for today, May 19, 2014 is about Rubik’s Cube invention. It is an interactive Google Doodle displayed worldwide on the Google homepage. The controlling in the Doodle is a bit difficult.