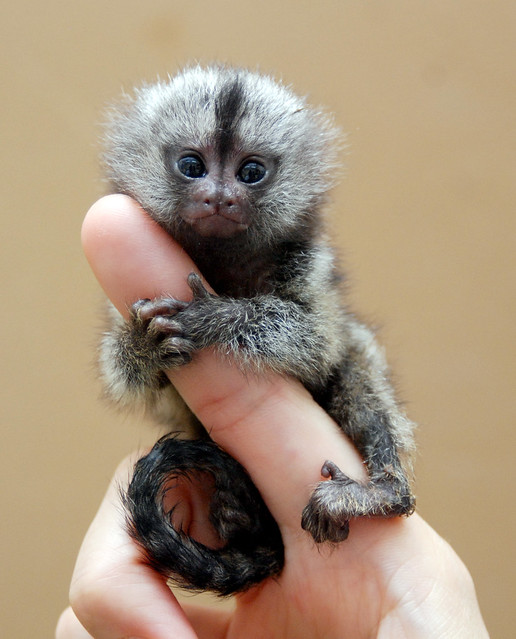 I have a very dear friend from Wales who raises these for companionship and pets. She was always talking about her monkeys; mentioned that she would bring one to my house and never did. I thought she was leading me on. But it wasn’t the case. I got to meet the Welshie’s monkeys and she told me they were marmoset monkeys.

Here’s what I found out about them.

What is a Marmoset?
Marmosets are a member of the primate family and are one of the smallest monkeys. These monkeys are semi messy animals and can be somewhat trained to defecate in a given area. Their urine has a strong odor, and some people will use special monkey diapers. They scent their areas by rubbing their perineums over everything: toys, food dishes, bedding, stuffed animals, furniture, rugs and caging.They are intelligent and need stimulation. Interaction can be supplemented with toys, but if a marmoset is kept as a pet by themselves, it will rely on the human family to become its family group.

Monkeys cannot be expected to be “well-behaved”. They will become bored and unhappy if confined to a small cage all day long with little to no interaction. It is a must to provide a play area or a tall outdoor enclosure in which they can climb high, the way they would in the wild.Monkeys are happy only when they can fulfill their social and emotional needs. They need other social animals like them, they need to feel loved and protected and generally long for genuine affection. It is a mistake to think of them as cats, dogs or hamsters.Monkeys have complex emotional needs, a high level of intelligence and are likely to live a long life.

The marmosets are 22 New World monkey species of the genera Callithrix, Cebuella, Callibella, and Mico. All four genera are part of the biological family Callitrichidae. The term marmoset is also used in reference to the Goeldi’s marmoset, Callimico goeldii, which is closely related.

Most marmosets are about 20 centimetres (8 in) long. Relative to other monkeys, they show some apparently primitive features: they have claws rather than nails, and tactile hairs on their wrists. They lack wisdom teeth, and their brain layout seems to be relatively primitive.

Their body temperature is unusually variable, changing by up to 4 °C (7 °F) in a day. Marmosets are native to South America and have been found in Bolivia, Brazil, Colombia, Ecuador, Paraguay and Peru. They have also been spotted in Central America, and Mexico. They are also raised in captivity as pets.

According to recent research, marmosets exhibit germline chimerism, which is not known to occur in nature in any other primates than callitrichids. 95% of Marmoset fraternal twins trade blood through chorionic fusions, making them hematopoietic chimeras.

Marmosets are highly active, living in the upper canopy of forest trees, and feeding on insects, fruit and leaves. They have long lower incisors, which allow them to chew holes in tree trunks and branches to harvest the gum inside; some species are specialised feeders on gum.

Marmosets live in family groups of three to 15, consisting of one to two breeding females, an unrelated male, their offspring and occasionally extended family members and unrelated individuals.

Their mating systems are highly variable and can include monogamy, polygyny and occasionally polyandry. In most species, fraternal twins are usually born, but triplets are not unknown. Like other callitrichines, marmosets are characterized by a high degree of cooperative care of the young and some food sharing and tolerated theft.

Adult males, females other than the mother, and older offspring, participate in carrying infants. Most groups scent mark and defend the edges of their ranges, but it is unclear if they are truly territorial, as group home ranges greatly overlap.

The favorite food of marmosets is carbohydrate-rich tree sap, which they reach by gnawing holes in trunks. Their territories are centered on the trees that they regularly exploit in this way. The smaller marmosets venture into the very top of forest canopies to hunt insects that are abundant there. 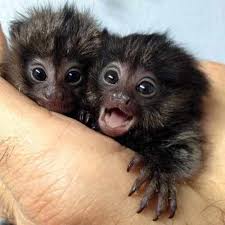 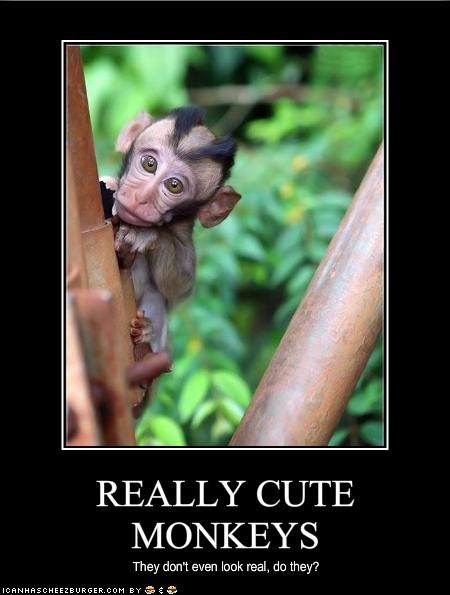 Average Lifespan: Up to 20 Years.

Diet: Marmoset canned food, fruits, and a source of protein like insects or mealworms. They must also have calcium added to their diet by giving them a slice of orange 3 times a week.

Size at Adulthood : Under a pound.

Minimum Cage size: You can have a  relatively small cage for your marmoset as long as they get time outside of the cage for exercise. The bigger the better as far as cage size goes.

Q: Do they require any vaccinations?
A: No vaccinations are needed however your vet may want to give vaccinations. Please be sure they have experience with primates before they treat them.

Q: What is their general personality?
A: Very affectionate, curious, loves attention and to play, very playful. They also have a humorous personality and are extremely intelligent.

Q: How are they with other pets?
A: Playful with ferrets and dogs, will get along with most cats. Keep an eye for playful fighting as marmosets are very small and dogs can get carried away and may hurt them accidentally.

Q: Will my marmoset bond to only one person?
A: Generally the marmoset will bond with everyone in the house that handles it regularly. It is usually not severely agitated by strangers and may go to them freely, some are more shy but not generally aggressive.

Q: Can I let my marmoset run free in my home?
A: Many marmoset owners do not even have a cage for them and let them run around loose like a dog. I would recommend that you baby proof your house and provide a safe environment for them to run free. This can be done all day long.

~~Negative Aspects of Owning a Marmoset~~

Although they don’t throw their poop, Marmosets will hang on the side of the cage and pee out of the cage, marmoset urine STINKS.

A pet marmoset can easily contract human diseases, such as the common cold. A human virus can be transmitted to the marmoset when it licks a plate or spoon, previously used by a human, or by close contact with the owner.
Captive marmosets will become territorial around the most dominant person, so they may attack and bite other people.

When they becomes sexually active, some marmosets can be really nasty and aggressive. It is very important that a marmoset should never be kept in isolation, because it is an extremely social animal.

They require special marmoset foods that must be special ordered online or found at a specialty store.

The worlds smallest monkey is the Dwarf Monkey.

This cute baby animal is the pygmy marmoset. Maybe the cutest pet in the world, 10 of these baby monkeys could ride on a pig.

It is one of the smallest primates and considered the smallest true monkey growing to about 6.5 inches in length excluding its tail. Both males and females barely weigh over 4 oz, and because of their tiny size they have been given the nicknames of pocket monkey and little lion.