Beating The War Drums For Iran: How AIPAC Is Splitting America

Nowhere are the dangers of partisan disunity more apparent than in the United States’ handling of foreign policy, especially when it comes to Iran and the forces working to maintain it the latest boogeyman of U.S.

A dispute over American foreign policy in the Middle East is prompting an unprecedented schism between the executive and legislative branches.

Nowhere has this split been made more apparent than in the open letter sent by 47 Republican senators to the leadership of Iran on March 9. One faction of the U.S. government wants to maintain a policy of destructive regime change and isolation of Iran and its allies, while the other is considering a more moderate approach that starts with a nuclear deal and ends in potential peace between longstanding rivals.

According to its author, Sen. Tom Cotton of Arkansas, the letter was meant to educate Iran’s leaders about the nature of the American constitutional system so that Iran does not believe an agreement made by it and the P5+1 nations (the United States, China, Russia, France and the United Kingdom, plus Germany) will be binding.

Yet the letter was actually intended to destroy those negotiations, an outcome which fits squarely into the policies of Israel’s Likud Party government, which won Tuesday’s elections. Headed by Prime Minister Benjamin Netanyahu, the Likud Party has influence over the actions of the American Israel Public Affairs Committee (AIPAC), a pro-Israel lobby group.

Indeed, Open Secrets reported that Cotton received hundreds of thousands of dollars from pro-Israel donors, including over $900,000 from the Emergency Committee for Israel, during his election campaign.

According to MJ Rosenberg, Cotton’s letter was likely written by AIPAC.

While the anti-Iran coalition may seem like it’s backed by every Senate Republican, it is not. Seven of the Senate’s current 54 Republicans refused to sign Cotton’s letter, revealing a more level-headed approach to an issue that is being promoted among partisan lines.

Those seven senators deserve to be named for not following the herd and goading the U.S. into another war in the Middle East. They are Lamar Alexander (Tenn.), Dan Coats (Ind.), Thad Cochran (Miss.), Susan Collins (Maine), Robert Corker (Tenn.), Jeff Flake (Ariz.), and Lisa Murkowski (Alaska). Col. Lawrence B. Wilkerson(Ret.), Secretary of State Colin Powell’s chief of staff from 2002 to 2005, described them as “The Magnificent Seven” in a recent Huffington Post article.

“Many of the 47 who did sign the letter followed the herd instinct to hurt the president and now wish they had not,” Wilkerson wrote. “I commend, however, most strongly the seven. They refused to join the herd no matter the thundering of its hooves.” 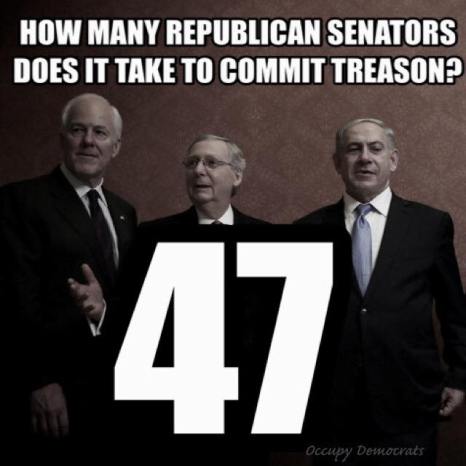 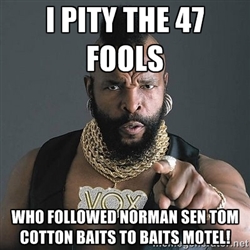