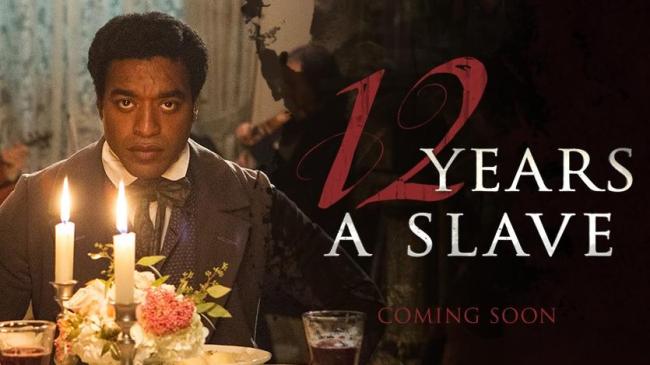 It’s already in theaters!! I saw it last night!

Speechless … because of the story and superb acting!!

12 Years a Slave is a 2013 British-American epic historical drama film, an adaptation of the 1853 autobiography Twelve Years a Slave by Solomon Northup, a free black man who was kidnapped in Washington, D.C. in 1841 and sold into slavery. He worked on plantations in the state of Louisiana for 12 years before his release.

The first scholarly edition of Northup’s memoir, co-edited by Sue Eakin and Joseph Logsdon in 1968, carefully retraced and validated his account, finding it to be remarkably accurate.

The film is directed by Steve McQueen, his third feature, and written by John Ridley. Chiwetel Ejiofor stars as Solomon Northup; Ejiofor has received universal praise for his work. Principal photography took place in New Orleans, Louisiana June 27 – August 13, 2012, on a production budget of $20 million, and the locations used were four historic antebellum plantations: Felicity, Magnolia Plantation, Bocage, and Destrehan, one of these close to the actual plantation in which Northup was held.

12 Years a Slave premiered at the Telluride Film Festival on August 30, 2013 and has been near-universally lauded by critics. The film began its release in the US on October 18, 2013 and is scheduled to be released in the UK on January 24, 2014.

Its box office performance is being watched carefully due to the difficult nature of its topic.

In 1841, Solomon Northup (Ejiofor) is a free black man living with his wife and two children in Saratoga Springs, New York. He makes his living as a skilled carpenter and violin player. One day he is lured into a lucrative touring gig by a pair of men (McNairy and Killam). 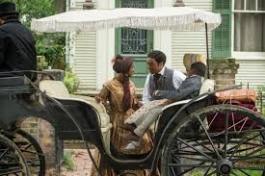 His wife and two children are going away for three weeks and two days …..

After a night out in Washington, D.C. with the two men, Northup awakens to find himself chained to the floor. In shock at what has happened, Northup realizes he has been drugged and sold into slavery.

The entire film is told from his point of view. 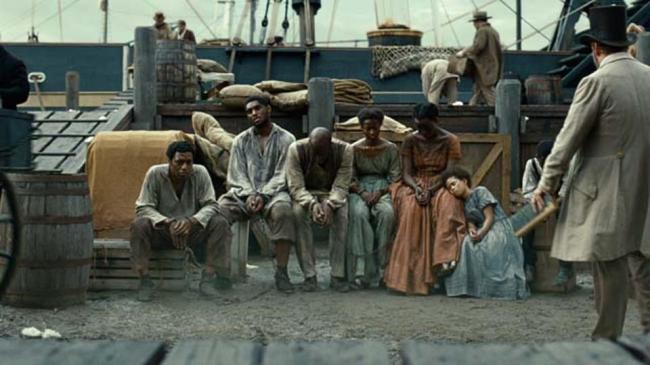 Now named “Platt,” Northup is transported by ship to New Orleans, where he is purchased as a slave by plantation owner William Ford (Cumberbatch).

Enduring his new life, Northup stays on good terms with Ford as he assists him by engineering a waterway for transporting logs downstream swiftly.

Northup’s ability as a musician is discovered, and Ford gives him a violin.

Northup’s first task is to pick cotton during the harvest, when he is expected to pick at least 200 pounds each day, or be beaten.

A young female slave, Patsey (Nyong’o), continually picks the most cotton of any worker, by a wide margin. Despite his wife’s (Paulson) jealousy, Epps lusts for Patsey and rapes her. Both he and his wife abuse her physically.

The slaves care for each other when one or more is beaten. Another day, a man dies in the cotton field. As the slaves hold funeral for him after burying him in the slave cemetery, they start singing a spiritual. Northrup slowly joins them, finding strength in music he had not known as a free man in New York.

Solomon tries to write a letter to his friends up north … the fellow who was going to help him betrays him by reporting it to the slave master.

A Canadian laborer Bass (Pitt) is hired as a carpenter. After he expresses his opposition to slavery, Northrup finally confides about his life and kidnapping. He asks for help in getting a letter to his family. Bass risks his life in taking such action in the South.

One day, while working in the fields to break up the dirt for planting, Northup is called out by the local sheriff, who arrives in a carriage with two other men. Inquiring about Northup’s past life, the sheriff asks a series of questions to match him to the facts of his life in Saratoga.

Northrup sees one of the other men is an attorney he knows from the city, and realizes he has come to free him; the two men embrace. Epp resists, but the sheriff tells him Northup is a free man. After being enslaved for 12 years, Northup is restored to freedom and returned to his family in Saratoga. End notes recount the inability of Northrup and his legal counsel to prosecute the men responsible for his being sold into slavery.

I am borrowing the words of this writer because he expresses so well what this story is about and, more importantly how we should evaluate this true and sad period in the history of the United States.
“12 Years a Slave”: Eye-Opening Must-See
By: Jake Walters ’14 … Staff Writer

As a history major at Amherst, I’ve taken numerous classes specializing in slavery in the US. I thought I could understand something of the history, the pain, the suffering, the anguish. I thought, to whatever extent it was possible for a white kid in the early 21st century to know, I knew. I was wrong. Sitting in the theater watching “12 Years a Slave,” I felt the inescapable grasp of history around my neck and I couldn’t do anything about it. Never before have I felt so clearly and achingly the tragedies upon which America is built. I felt helpless, my face contorting in anguish.

My reaction was visceral; I gritted my teeth, I began to shake uncontrollably. “12 Years a Slave” is the best film of the year, and the best “Oscar” film I’ve seen in longer than I can remember.

But “12 Years a Slave” isn’t just a great film. It’s an important one.

Adapted from Solomon Northrup’s autobiographical tale of his kidnapping into slavery and the dozen years of hell spent before he eventually secured his freedom, “12 Years a Slave” is telling not simply because it explores slavery, but because of how it explores it.

As Northrup (Chiwetel Ejiofor) is kidnapped, sold to a nominally “benevolent” master and eventually a more openly cruel, abusive master and tries to secure his freedom, the film reveals itself as one of the first major filmic attempts to explore slavery not as a political institution (see “Lincoln”) or as an individualist fantasy-land in which any slave could take on an army of whites if they “wanted” to ( “Django Unchained”) but as it was actually experienced to those who endured it.

Films about slavery are almost always about fighting or overcoming it, but in doing so they fail to truly understand the mental and emotional anguish of slavery and the real lived experience of it. Many ask why so few slaves openly rebelled against their masters, which paints slaves as docile and content with slavery. But “12 Years a Slave” shows the mental and emotional torture of slavery and the constant state of doom that gripped plantation life that only manifested most openly in violence.

We see people being whipped at times, but even in scenes where no one is physically hurt, the noise of the overseers whip is a constant reminder of what could be coming next. The sense of dread experienced in the theater in part captures this sense of constant anxiety experience by Northrup. As we hear the cries of a slave continue over a slave master trying to prove his benevolence through reciting scripture, the two noises fighting and tensing and reflecting the constant contradictions and power battles of slave life, we become well aware that many slaves did rebel in subtle ways but that open rebellion would have meant death.

The film, despite all the horrors that occur within, is simply gorgeous and remarkably well-constructed visually. Shots sway in and out of machinery and fields, breathing life to the smallest portions of slave life. Shots of the sky and Spanish-moss covered trees capture the mystery of a land both completely foreign and all too familiar. Director Steve McQueen, coming off his devastating exploration of sex-addiction, “Shame,” brings life to the film not only through painstaking period detail but a mastery of the subjective camera.

A shot late in the film where Northrup breaks the fourth wall, looking directly at the camera at the audience, conveys discomfort, confusion, helplessnes and numerous other emotions. Light and dark, perhaps fittingly due to the subject matter, play in throughout. The film’s most striking image involves a letter being burned in the dark, the embers dying away slowly and taking Northrup’s hope with them. Never before have I seen a film that made darkness feel simultaneously so completely empty and whole, engulfing the world around it into nothingness.

What an awesome movie!!

To think that it’s a true life story is mind boggling!
How are humans different now? Injustices, prejudice, violence, debasing of classes, human trafficking, forced labor ….. and the list goes on and on. What have we learned with time?