The light at the end of the tunnel is a figure of speech that refers to an expectation of hope that circumstances will improve after weathering a difficult situation.

“Believe that there’s light at the end of the tunnel. Believe that you might be that light for someone else.”

“There’s light at the end of the tunnel. The problem is that tunnel is in the back of your mind. And if you don’t go to the back side of your mind you will never see the light at the end of the tunnel. And once you see it, then the task becomes to empower it in yourself and other people. Spread it as a reality. God did not retire to the seventh heaven, God is some kind of lost continent IN the human mind.”

“Sometimes life seems a dark tunnel with no light at the end, but if you just keep moving forward, you will end up in a better place.”

“If you do not see light at the end of the tunnel, consider it an opportunity to create an opening yourself, wherever you want.”

“Remember, the light at the end of the tunnel may be you.”

“When there’s no way out, you just follow the way in front of you.” 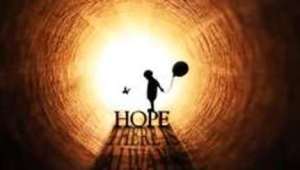 Hope is an optimistic attitude of mind based on an expectation of positive outcomes related to events and circumstances in one’s life or the world at large. As a verb, its definitions include: “expect with confidence” and “to cherish a desire with anticipation”.

Among its opposites are dejection, hopelessness and despair.

~~Light At The End Of The Tunnel~~