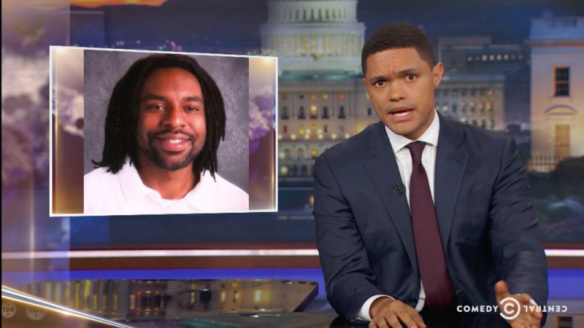 JURY OF YOUR PEERS

IN CASE YOU MISSED IT

Trevor (born 20 February 1984) is a South African television and radio host, and comedian, known for his role as host of The Daily Show on American network Comedy Central since September 2015.

He is a Black man … he knows how this feels.

America should be ashamed but then again, there is so much to be ashamed for, that this is only a small drop in a huge bucket.

On Wednesday night’s episode, June 21, of Comedy Central’s “The Daily Show,” Trevor Noah devoted the second half of his monologue to his devastation after seeing the just-released dash-cam video footage of the Minnesota police officer who fatally shot Philando Castile during a traffic stop last year.

Last week, the officer was acquitted on all charges, including manslaughter.

When I watched this video, it broke me.

It just – it broke me. You see so many of these videos, and you start to get numb, but this one? Seeing the child, that little girl, getting out of the car, after watching a man get killed, it broke my heart into little pieces.

Like, I thought of every joke people make about “Oh, the most confusing day in the hood is Father’s Day”:

That’s a child that grows up not knowing what it’s like to have somebody in their life.

It’s one thing to have the system against you – the district attorneys, the police unions, the courts – that’s one thing. But when a jury of your peers, your community, sees this evidence and decides that even this is self-defense, that is truly depressing. Because what they’re basically saying is in America, it is officially reasonable to be afraid of a person just because they are black.

And that’s the truth of what we saw with this verdict.

~~The Truth About the Philando Castile Verdict~~