May the Force be with You!

Pack (canine), a group of wolves that live, feed, and travel as a family group

Wolves are the largest members of the dog family. Adaptable gray wolves are by far the most common and were once found all over the Northern Hemisphere. But wolves and humans have a long adversarial history. Though they almost never attack humans, wolves are considered one of the animal world’s most fearsome natural villains. They do attack domestic animals, and countless wolves have been shot, trapped, and poisoned because of this tendency.

Wolves live and hunt in packs of around six to ten animals. They are known to roam large distances, perhaps 12 miles (20 kilometers) in a single day. These social animals cooperate on their preferred prey—large animals such as deer, elk, and moose. When they are successful, wolves do not eat in moderation. A single animal can consume 20 pounds (9 kilograms) of meat at a sitting. Wolves also eat smaller mammals, birds, fish, lizards, snakes, and fruit.

Wolf packs are established according to a strict hierarchy, with a dominant male at the top and his mate not far behind. Usually this male and female are the only animals of the pack to breed. All of a pack’s adults help to care for young pups by bringing them food and watching them while others hunt.

As the relationship in the blogosphere became stronger, we realized that there are common interests, ideas, feelings, values, thoughts, circumstances that bound us together.

We realized that these were connections that were strong and foresaw that they were long lasting. 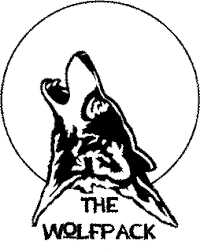