“Mardi Gras“, “Mardi Gras season“, “‘Fat Tuesday‘” and “Carnival season“, in English, refer to events of the Carnival celebrations, beginning on or after the Epiphany or Kings day and culminating on the day before Ash Wednesday. Mardi Gras is French for Fat Tuesday, referring to the practice of the last night of eating richer, fatty foods before the ritual fasting of the Lenten season, which begins on Ash Wednesday. The day is sometimes referred to as Shrove Tuesday, from the word shrive, meaning “confess.” Related popular practices are associated with celebrations before the fasting and religious obligations associated with the penitential season of Lent.

Popular practices include wearing masks and costumes, overturning social conventions, dancing, sports competitions, parades, etc. Similar expressions to Mardi Gras appear in other European languages sharing the Christian tradition, as it is associated with the religious requirement for confession before Lent begins.

In many areas, the term “Mardi Gras” has come to mean the whole period of activity related to the celebratory events, beyond just the single day. In some US cities, it is now called “Mardi Gras Day” or “Titty Tuesday“.

The festival season varies from city to city, as some traditions consider Mardi Gras the entire period between Epiphany or Twelfth Night and Ash Wednesday. Others treat the final three-day period before Ash Wednesday as the Mardi Gras.

Carnival is an important celebration in Anglican and Catholic European nations. In the United Kingdom and Ireland, the week before Ash Wednesday is called “shrovetide“, ending on Shrove Tuesday. It has its popular celebratory aspects as well. Pancakes are a traditional food. Pancakes and related fried breads or pastries made with sugar, fat and eggs are also traditionally consumed at this time in many parts of Latin America and the Caribbean.

Many cities celebrate this tradition. Mardi Gras celebrants in the French Quarter of New Orleans, in the traditional colors of purple, green, gold, and especially white.

While not observed nationally throughout the United States, a number of traditionally ethnic French cities and regions in the country have notable celebrations. Mardi Gras arrived in North America as a French Catholic tradition with the Le Moyne brothers, Pierre Le Moyne d’Iberville and Jean-Baptiste Le Moyne de Bienville, in the late 17th century, when King Louis XIV sent the pair to defend France’s claim on the territory of Louisiane, which included what are now the U.S. states of Alabama, Mississippi, and Louisiana.

The expedition, led by Iberville, entered the mouth of the Mississippi River on the evening of March 2, 1699, Lundi Gras. They did not yet know it was the river explored and claimed for France by René-Robert Cavelier, Sieur de La Salle in 1683. The party proceeded upstream to a place on the west bank about 60 miles downriver from where New Orleans is today, and made camp.

This was on March 3, 1699, Mardi Gras, so in honor of this holiday, Iberville named the spot Point du Mardi Gras (French: “Mardi Gras Point”) and called the nearby tributary Bayou Mardi Gras. Bienville went on to found the settlement of Mobile, Alabama in 1702 as the first capital of French Louisiana. In 1703 French settlers in Mobile established the first organized Mardi Gras celebration tradition in what was to become the United States.

The first informal mystic society, or krewe, was formed in Mobile in 1711, the Boeuf Gras Society. By 1720, Biloxi had been made capital of Louisiana. The French Mardi Gras customs had accompanied the colonists who settled there.

Knights of Revelry parade down Royal Street in Mobile during the Mardi Gras season.

In 1723, the capital of Louisiana was moved to New Orleans, founded in 1718. Mobile’s Cowbellion de Rakin Society was the first formally organized and masked mystic society in the United States to celebrate with a parade in 1830. The idea of mystic societies was exported to New Orleans in 1856 when six businessmen, three of whom were formerly of Mobile, gathered at a club room in New Orlean’s French Quarter to organize a secret society, inspired by the Cowbellion de Rakin Society, that would observe Mardi Gras with a formal parade.

They founded New Orleans’ first and oldest krewe, the Mistick Krewe of Comus. The tradition in New Orleans expanded to the point that it became synonymous with the city in popular perception, and embraced by residents of New Orleans beyond those of French or Catholic heritage. Mardi Gras celebrations are part of the basis of the slogan, Laissez les bons temps rouler. 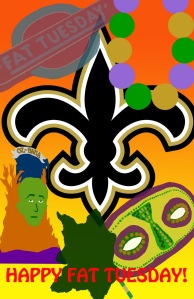 Other cities along the Gulf Coast with early French colonial heritage, from Pensacola, Florida to Lafayette, Louisiana, have active Mardi Gras celebrations in balls. In the rural Acadiana area, many Cajuns celebrate with the Courir de Mardi Gras, a tradition that dates to medieval celebrations in France.

The historical roots of Carnival and Mardi Gras lie in the Catholic calendar. It is the “last hurrah” before Lent begins on Ash Wednesday.

That’s why the enormous party in New Orleans, for example, ends abruptly at midnight on Tuesday, with battalions of street sweepers pushing the crowds out of the French Quarter towards home.

Mardi Gras literally means “Fat Tuesday” in French. The name comes from the tradition of slaughtering and feasting upon a fattened calf on the last day of Carnival. The day is also known as Shrove Tuesday (from “shriven” “to confess”), Pancake Tuesday and fetter Dienstag. The custom of making pancakes comes from the need to use up fat, eggs and dairy before the fasting and abstinence of Lent begins.

As noted above, “Mardi Gras is French for Fat Tuesday, referring to the practice of the last night of eating richer, fatty foods before the ritual fasting of the Lenten season, which begins on Ash Wednesday.”

“Rid yourself of sin”

Ash Wednesday is the first day of Lent in the Western Christian calendar, directly following Shrove Tuesday. Occurring 46 days before Easter, it is a moveable feast that can fall as early as February 4 and as late as March 10.

According to the canonical gospels of Matthew, Mark and Luke, Jesus spent 40 days fasting in the desert, where he endured temptation by Satan. Ash Wednesday marks the beginning of this 40-day liturgical period of prayer and fasting or abstinence. Of the 46 days until Easter, six are Sundays. As the Christian sabbath, Sundays are not included in the fasting period and are instead “feast” days during Lent.

Ash Wednesday derives its name from the practice of placing ashes on the foreheads of adherents as a celebration and reminder of human mortality, and as a sign of mourning and repentance to God. The ashes used are typically gathered from the burning of the palms from the previous year’s Palm Sunday.