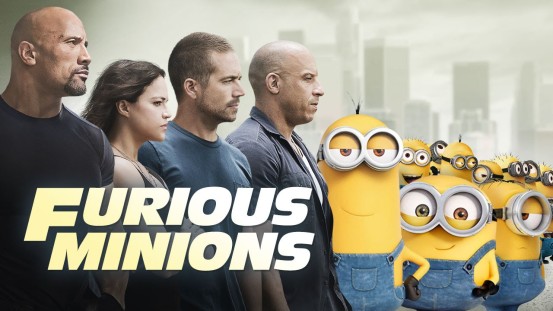 “We wanna piece of the action”

As we get closer to the release of the Minions movie, the hapless little helpers are set to appear everywhere, as this funny mash-up trailer demonstrates.

The trailer shows the Minions invading the full-throttle world of Fast & Furious 7 released in April 2015. Ever wanted to see Vin Diesel get a helping hand from Gru’s devoted sidekicks? Now’s your chance.

The Minions movie takes place before the events of the Despicable Me series, and shows us the characters they’ve served before, including Dracula, the dinosaurs and the ancient Egyptians. Sandra Bullock voices sassy megalomaniac Scarlett Overkill, destined to become the Minions’ latest despicable master.

The Minions movie is released on 26th June.

THE REAL STORY EVERYBODY KNOWS

Furious 7 (stylized onscreen as Furious Seven and alternatively known as Fast & Furious 7 is a 2015 American action film directed by James Wan and written by Chris Morgan. It is the seventh installment in The Fast and the Furious franchise.

“As it appears in … full credit”

~~Minions Invade The Fast & The Furious~~

The Movieclips Trailers channel is your destination for the hottest new trailers the second they drop. Whether it’s the latest studio release, an indie horror flick, an evocative documentary, or that new RomCom you’ve been waiting for, the Movieclips team is here day and night to make sure all the best new movie trailers are here for you the moment they’re released.