The Piano Guys are an American musical group consisting of Jon Schmidt, Steven Sharp Nelson, Paul Anderson, and Al van der Beek. They gained popularity through YouTube, where they posted piano and cello renditions of popular songs and classical music. Schmidt and Nelson’s music is accompanied by professional-quality videos shot and edited by Paul Anderson.

Hailing from Utah, The Piano Guys became an Internet sensation by way of their immensely successful series of strikingly original self-made music videos. They’ve made over 35 since joining forces in early 2011, including their hit video, an innovative 10-handed version of One Direction’s “What Makes You Beautiful.” But it’s the Guys’ highly original blend of classical music with pop that has really been the cause of an Internet phenomenon that has brought them to their major label debut album, The Piano Guys, released on Sony Masterworks.

In the last few months, The Piano Guys have performed on everywhere from “The Tonight Show with Jay Leno,” to “The Today Show” and “Katie.”  One of their videos –  “Mission Impossible” – featuring YouTube violin sensation Lindsey Stirling, continues to build momemtum with over 1.5M views in a month.

It finds the band and Stirling in a spy thriller as covert operatives while playing their unique take on this famous musical theme.

(You will soon see the “Mission Impossible” video featured here).

The album features more of the imaginative mash-up arrangements that The Piano Guys are already famous for, including sources ranging from Michael Jackson to Mozart, The Bourne Identity to David Guetta. It also includes an original song and innovative takes on hits by One Direction, Adele and Christina Perri.

Jon Schmidt and Steven Sharp Nelson were booked for a Piano Guys show in Hawaii. How could we resist filming our next video in the land of Aloha — beautiful beaches, green mountains, and fresh pineapple??

We went to our Founders and Facebook fans to ask what song they wanted us to play there. “Somewhere Over the Rainbow” was the nearly-unanimous response. But you know how we are … we couldn’t “just” do this tune by itself … so in the studio we found a made-in-heaven match-up in the timeless melody from the Shaker Hymn “Simple Gifts” written in the 1800’s (also used by Aaron Copland in his Ballet “Appalachian Spring”).

We feel it’s an especially appropriate mash-up because of our profound love and respect for the Hawaiian culture — a people who are so good at finding happiness in simplicity. As you probably could hear we borrowed a lot of ideas from Iz’s version which has become the stuff of legend. This arrangement is, in part, a tribute to him.

Getting a piano onto a sandy beach and then onto a big hill in a famous ranch within the SAME day (we only had 8 hours to film) was no small feat. The only thing harder would be to be predict Hawaiian weather, which ended up being our biggest challenge.

“We had a little extra help on this one. My mother, Lynne Sanders Nelson — a main source of my inspiration for pursuing music — passed away early in life from the effects of a brain tumor. She was an incredibly-gifted musician and taught me to play music passionately rather than just playing ‘notes’ on a page. ‘Somewhere Over the Rainbow’ was one of her favorite songs. We finished this arrangement on what would have been her 70th birthday. Somehow she helped. I miss her so very much, but when I play songs like this I feel like I get to be with her again. This song is dedicated to her.”
Steven Sharp Nelson

Thank you so much to the Kualoa Ranch who bent over backwards last-minute for us and provided us such a beautiful place to shoot. Visit their site at http://www.kualoa.com — when you visit Hawaii be sure to stop by and take a tour — its where dozens of huge blockbluster movies/tv shows have been filmed. 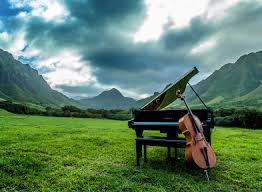 This song is dedicated to
Lynne Sanders Nelson, The Hill Family, J. Mueller, & the people of Hawaii