A crooner with one of the most recognizable and imitated voices in Latin music, Feliciano sang with the long-running Fania All Stars in the heyday of New York’s thriving salsa scene in the 1970’s.

“Cheo was one of the most important stalwarts and forces of our music,” said Juan Moreno Velazquez, a New York-based journalist who has written biographies of salsa’s biggest stars. “He will be mourned in Puerto Rico and throughout Latin America. He connected to the people, a true stalwart of our culture for all Latinos. The passing of this icon leaves immense pain throughout Latin America.”

Indeed, the governor of Puerto Rico has declared three days of mourning and, throughout the island on Thursday, many motorists drove with their headlights on in tribute. Puerto Rico Gov. Alejandro Garcia Padilla said in a statement: “Today, Puerto Rico lost one of its greatest voices.”

Feliciano lost control of the Jaguar he was driving and crashed into a light pole, police said. He died at the scene.

Police told CNN en Español the singer was the only person in the car. The speed he was traveling at was under investigation, police said. His wife, Coco, told reporters that Feliciano did not like to wear a seat belt. The singer’s son, José Enrique Feliciano, praised his father at the scene of the accident.

“His music embodied the rhythm of Puerto Ricans living in New York City and his lyrics helped tell our collective story”.

The death of Feliciano, beloved for his hits such as “Anacaona” and “Amada Mia,” was noted on the Twitter and Facebook accounts of some of Latin music’s biggest stars, from Ricky Martin to Ruben Blades, who tweeted “BROTHER CHEO. I’ve just learned of the accident and it is difficult for me to accept.”

Feliciano (birth name: José Luis Feliciano Vega) was born in Ponce, Puerto Rico, where he was raised and educated. His parents were Prudencio Feliciano and Crescencia Vega. As a child, he was nicknamed “Cheo” by his family – a colloquial version of his name José, normally used by close friends and family. However, the name stuck and became part of his everyday name (using the nickname avoids confusion with José Feliciano, another major Puerto Rican singer to whom he is not related). At a young age he was influenced by the bolero music of the Trio Los Panchos.

When he was only eight years old he formed his first group with his friends and named it “El Combo Las Latas”. They were so poor that their musical instruments were made out of cans. After finishing his primary education, Feliciano attended the Escuela Libre de Música Juan Morel Campos in Ponce, where he studied percussion. 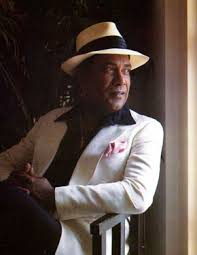 In 1952, Feliciano moved with his family to New York City and settled down in Spanish Harlem. Here he auditioned as a percussionist in the “Ciro Rimac’s Review” band – giving him his first professional musical job. Bandleader Tito Rodríguez, heard Feliciano play and offered him a job in his orchestra. He accepted, but after playing for some time with Tito, he left the band to play the conga for Luis Cruz. Despite leaving, he always remained on friendly terms with Tito. Feliciano also played percussion for Kako y su Trabuco orchestra. He was also a roadie for Mon Rivera.

In 1955, Rodríguez found out that Joe Cuba was in need of a singer for his sextet. Aware that Feliciano was also a talented singer, he recommended Cuba that he try out for the position. Feliciano auditioned and became a vocalist for the Joe Cuba Sextet. He was the rare baritone among salsa singers, and his deep voice and quick wit as an improviser made him a favorite among the Latino public.

On October 5, 1957, Feliciano made his professional singing debut with the Joe Cuba Sextet, singing the song “Perfidia”. He remained with the sextet for 10 years. In 1967, he joined the Eddie Palmieri Orchestra and sang for them for two years. However, at the same time he began using drugs at 21 years old. His increasing addiction led him to heroin, which in turn threatened his life and career. He decided to quit drugs “cold turkey” and eventually joined Puerto Rico’s rehabilitation center, Hogares CREA. Feliciano credits Tite Curet Alonso, the author of most of his hits and his best friend, with pushing him through his rehabilitation.

As a result, he was a vehement anti-drug spokesperson, who volunteered to assist in the rehabilitation of fellow salsa artists who fell prey to drug addiction.

There are no words to describe this giant from the salsa scene in Puerto Rico.

I grew up with his music and saw his growth as a human being, his trial and tribulations and his successes. Puerto Rico has lost another one of it’s voices.

May he rest in Eternal Peace!