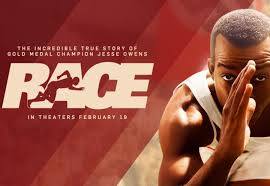 I went to the movies yesterday. I had seen the previews of this film and I knew it was a “must-see” for me.

I have seen some reviews. It seems that some critics feel that the film didn’t “perform” as expected. I don’t really follow what critics say. Most of the time, in my humble opinion .. like the weathermen … they are wrong.

I enjoyed the movie thoroughly.

For history buffs, for sports fans and for any interested in periods of time where ignorance, bigotry, racism and prejudice were the “law of the land”

Race is a 2016 biographical sports-drama film. It is the second feature biopic film about African American athlete Jesse Owens, who won a record-breaking four gold medals at the 1936 Berlin Olympic Games.

Principal photography began on July 24, 2014, in Montreal, Canada. Forecast Pictures, Solo Films, and Trinity Race produced the film, Entertainment One released the film in Canada, Focus Features and TriStar Pictures in the United States on February 19, 2016, and Square One Entertainment will release in Germany on May 5, 2016. The film was supported by the Owens family, the Jesse Owens Foundation, the Jesse Owens Trust and the Luminary Group.

Owens specialized in the sprints and the long jump and was recognized in his lifetime as “perhaps the greatest and most famous athlete in track and field history”.

His achievement of setting three world records and tying another in less than an hour at the 1935 Big Ten track meet in Ann Arbor, Michigan, has been called “the greatest 45 minutes ever in sport” and has never been equaled.

He was the most successful athlete at the games and as such has been credited with “single-handedly crushing Hitler’s myth of Aryan supremacy.”

In 1936, Owens arrived in Berlin to compete for the United States at the Summer Olympics. According to fellow American athlete James LuValle, who won bronze in the 400 meters, Owens arrived in Berlin to a throng of fans, many of them young girls, yelling “Wo ist Jesse? Wo ist Jesse?” Many of them had come with scissors and had begun snipping at Owens’ clothing, forcing him to retreat back onto the train.

After that, when Owens left the athletes’ village, he usually had to go with some soldiers to protect him.

In contrast, Adolf Hitler was using the games to show the world a resurgent Nazi Germany.He and other government officials had high hopes that German athletes would dominate the games with victories. Meanwhile, Nazi propaganda promoted concepts of “Aryan racial superiority” and depicted others, including those of African descent, as inferior. Owens countered this by winning four gold medals.